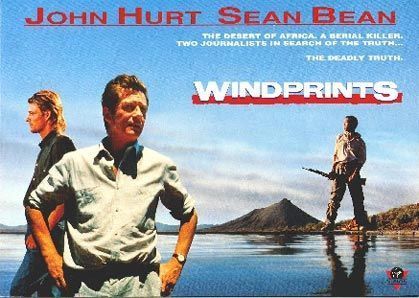 Please credit when use. Doubleclick for full size

WindPrints is the story of a young South African trying to come to terms with his role in a society going through tremendous social and political changes.

Anton van Heerden (Sean Bean), a news cameraman working at the forefront of the political upheaval in Johannesburg during the early 1980s is sent to film a manhunt in Namibia where he is forced to confront his attitude to his work and his Afrikaner roots, with violent consequences.

Anton is known as a highly skilled cameraman, capable of getting sensational news footage. Like many cameramen, he uses the camera to keep an objective distance between himself and the events he records. A colleague, Thozamile (Treasure Tshabalala), however, accuses him of recklessness and urges him to get more personally involved in the events he films. As his camera work is seen across the world he has a responsibility to ensure it reflects the events accurately rather than relying on sensation for effect.

Anton is given the opportunity to consider Thozamiles challenge when he is sent to Namibia by his bureau chief (Anthony Fridjohn) to work with veteran news journalist, Charles Rutherford (John Hurt). Charles is making an in-depth news report about the hunt for a mysterious renegade Nama, Nhadiep (Lesley Fong), who has killed a number of farm labourers in a dusty sheep farming community over a period of two years. Ironically, the very people under threat, the Nama, have come to regard Nhadiep as a kind of deity, a superhuman spirit that can manifest itself in any form  the wind, a rock, a human being. To the Nama people, Nhadieps ability to defy the authorities has come to symbolize a spirit of defiance against the settlers in Namibia, despite his violence towards his own people.

Anton prides himself on being a hard-news cameraman, working at the cutting edge of history. As such, he has little interest in the story of Nhadiep, which he considers a soft-story. But gradually he is drawn in by the mysteries surrounding the enigmatic Nhadiep and soon finds himself aggressively urging the pragmatic and skeptical Charles to get to the heart of the story.

Antons pursuit of Nhadieps story brings him in direct conflict with one of the local farmers, Henning (Marius Weyers). Henning calls Anton a traitor for making a film about a lowly Nama, a hotnot and not about the suffering and losses of his own people, the Boere. But Hennings antagonism only serves to fuel Antons interest in Nhadiep and he immerses himself in the film.

But Antons infatuation with Nhadiep is challenged by a cynical journalist, Pieterse (Kurt Egelhof), who accuses the news crew of romanticizing Nhadiep and reinforcing his legendary status through media hype, conveniently ignoring his brutality towards his own people for the sake of a sensational film. Pieterse bitterly points out that Nhadiep might even be in the employ of certain farmers who are using his reign of terror to devalue land prices for their own ends.

Anton is appalled at the idea that Nhadiep may be nothing more than a mercenary. He wants to believe in Nhadieps magic. And again he finds himself accused of misrepresenting events.

His disillusionment soon gives way to an angry determination to find those responsible for Nhadieps murders. And in Antons mind, that person has to be the aggressive farmer, Henning. They are told that while the other farmers are selling up, hes busy buying. Anton discovers that a Nama woman, rumoured to be Nhadieps girlfriend, is living on Hennings farm. Anton believes Nhadiep is the father of her child.

Anton relentlessly pursues Henning, which alienates him from Charles. Finally Anton sets off on his own, determined to uncover the truth.

But his actions ultimately lead to Nhadieps death.

Anton is devastated. His desire to overcome his observer status has made him an accomplice in Nhadieps death and has ensured that any hope of discovering the truth behind Nhadieps motives is lost forever.

A crowd of Namas who gather at the police station at the news of the renegades death and are dismayed to discover that Nhadieps face has been shot away, disfigured beyond recognition. Some of the Nama crowd angrily accuses the police of shooting somebody else as a trick to get them back onto the farms again.

At Nhadieps funeral, in an emotional turning point for Anton, he sheds his camera and returns to Hennings farm alone to confront him about Nhadiep.

But Henning, in a defiant and triumphant mood, draws Anton into a fight. The two men batter each other with the ferocity of brothers in a civil war. But Anton is no match for Hennings strength and soon lies bleeding and exhausted. Henning staggers away bewildered that a fellow Afrikaner could fight him with such hatred.

Suddenly, a shot rings out, and Henning collapses to the ground. Shocked, Anton looks around, but there is nobody to be seen.

The gunman is never revealed. It might be Nhadiep. It might be somebody else. Who pulled the trigger is of no consequence. For it is the inexorable process of history that will destroy Henning and those he represents.

Set against the stark Namibian landscape, WINDPRINTS is in many ways a parable, a window onto the complex world of a society that is struggling to contain the rapid and inevitable changes that are taking place. It is told from the point of view of a young liberal Afrikaner who, though bewildered by the problems that beset his country, learns to fight for what he believes.

Sean Bean plays the idealistic young news cameraman Anton, in WINDPRINTS. His great love for his country and his absolute determination to get to the heart of the stories he covers makes it impossible for him to maintain a professional distance. This often thrusts him into dangerous situations, which threaten his personal survival. Sean has appeared in many critically acclaimed productions for the stage, film and television. Shortly before accepting the lead in WINDPRINTS, Sean appeared with Laurence Olivier in Derek Jarmans latest film WAR REQUIEM. Previous film credits include CARAVAGGIO, STORMY MONDAY and SAMSON AND DELILAH.