Tom and Thomas will be released on another name in the UK on November 8th. New title will be The Christmas Twins.Click thumbnail for full size cover.

Trailer for Tom and Thomas

After the success of 'Long live the Queen', Esmee Lammers has again made a family film starring a child. The scenario of 'Tom & Thomas' is also from her hand, as is the book with the same title, which she wrote with Han Kuyper. This time it was decided to make an English language film. Happily the actors were cast from England, so we don't see Lou Landre [local celebrity] as a security official with a gruesome accent. And of course we have Derek de Lint as the director of the orphanage, and Debby, a classmate of Thomas, who doesn't say a word and so escapes the suspicion of a Dutch background.

The story is set in London where Thomas lives with this foster father Paul (Sean Bean). He has a difficult time at school as he keeps seeing images of his 'imaginary friend' Tom. This Tom lives in an orphanage. He has witnessed child smuggling practices and is consequently chased by the smugglers. Thomas does not only see the images, he feels everything Tom feels, which is a lot, as Tom is regularly whipped. Nobody believes Thomas as he tells of Tom and the people around him are getting tired of it.

Thomas has one passion: space and in particular the first landing on the moon. He persuades Paul to take him to the Science Museum for his ninth birthday. In the maze of mirrors Thomas is suddenly faced with a real life Tom!

Once they have found each other they really do not want to let the other go. But Paul can not find out about Tom's existence as they fear he will not believe it and send Tom back to the home. As Tom is still running from the smugglers, he hides in Thomas's room. They change places several times, which leads to comical situations and misunderstandings.

Thomas cannot resist going to the orphanage and he gets caught and is mistaken for Tom. Soon Thomas is in a plane like a caged animal, on his way to Africa.

Tom and Thomas is an okay movie, with some exciting moments. Sean Bean, who currently also stars as Boromir in 'The Fellowship of the Ring', is perfect as Paul, the awkward father of Thomas. The title role is performed by Aaron Johnson, who plays both Tom and Thomas by means of 'splitscreen' and 'greenscreen'. Especially the scene in the mirror maze was excellently done, as nobody of the crew could be seen in the mirrors. Johnson, who had theatre and television productions to his credit, was also in the race to be Harry Potter, but lost out in the last round.

It's a pity the film lasts too long. We have to wait very long for the boys to actually meet. In the beginning of the movie the switch from Tom to Thomas and back is made often, which causes some confusion. Lammers did try to separate the boys' worlds, by making Tom's world ashen and characterising Thomas's world with yellow and red colours. The school Thomas attends has bright colours, with the children dressed in equally bright colours, although most schools in England still use uniforms.

Tom and Thomas is a nice successor to 'Long Live the Queen' but will certainly not surpass it.

Audio from The Making Of

Sean about his character Paul

Sean about the film

Sean on the director Esme Lammers

Sean about filming in London

Russian Movie Poster, thanks to Tsvetytkm 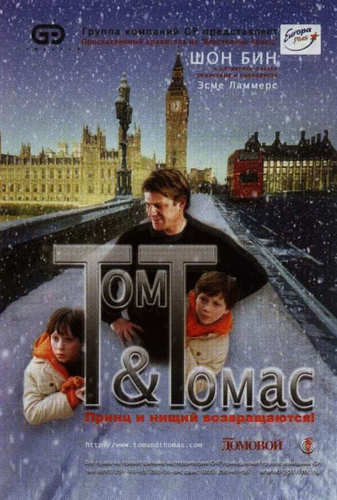 Tom & Thomas is a film about two children linked by a bond closer than friendship and stronger than family ties.

The film Tom & Thomas is set in London. Everyone is preparing for Christmas...
there is snow...there are exuberant shop windows filled with Christmas presents...
and sparkling Christmas trees.

To celebrate their ninth birthday, the boys visit the impressive mirror maze in the Science Museum. There, the children come face to face with each other for the first time, their images reflected in the mirrors of the mirror maze over and over. They want to stay together forever...but this isn't easy.

Nobody is supposed to know where Tom is. After discovering that the children's home where he was staying was being used as the headquarters of a gang of child traders, he ran away. Still hunted by the child traders, he goes into hiding at Thomas's place, just after Thomas has solemnly promised his foster father never, ever to play with this imaginary friend Tom again! It's not the right moment, Thomas feels, to tell him that Tom is not imaginary at all, and really does exist. And so Tom takes Thomas's place at school - and at home - on a regular basis. This causes confusion, because Thomas is a decent, careful, polite boy...whereas Tom is not afraid of anyone - or anything - and has never been taught to watch his tongue.

But then, the child traders mistake Thomas for Tom - and they want to smuggle him out of the country by putting him inside the cargo compartment of an airplane! Tom, who has no intention of letting his brother down, hides inside the wheel bay.

A thrilling denouement follows...and only then do the others realize that Tom and Thomas are not imaginary friends at all...but real twins.