Trailer for The Field

Screencaps from The Field

To Bull McCabe (Richard Harris) it is his life, but now The Field he has worked and loved for as long as he can remember is to be sold by public auction. Years of backbreaking toil has transformed the field from three acres of rock and scrub into a lush green pasture. So when the widow (Frances Tomelty) decides to put the property up for auction without any consideration of his work, an outraged McCabe is determined to buy it at all costs.

When as American (Tom Berenger) bids for the land against Bull, the stage is set for a fearful confrontation that both men are determined to win. With both the land and their livelihood at stake Bull and his son Tadgh (Sean Bean) attempt to frighten off the American. It's a battle that they can't afford to lose, as The Field holds a dark secret that must be protected at any costs.

Tadgh however, much to Bulls dismay, shows no interest in working The Field or making a life for himself and Bulls anger at Tadgh's affair with a gypsy girl opens up an even bigger gulf between them.

The obsession with The Field at the attempts to make a man out of Tadgh ultimately lead to tragic consequences.

Cap from the Richard Harris Interview, click for full size 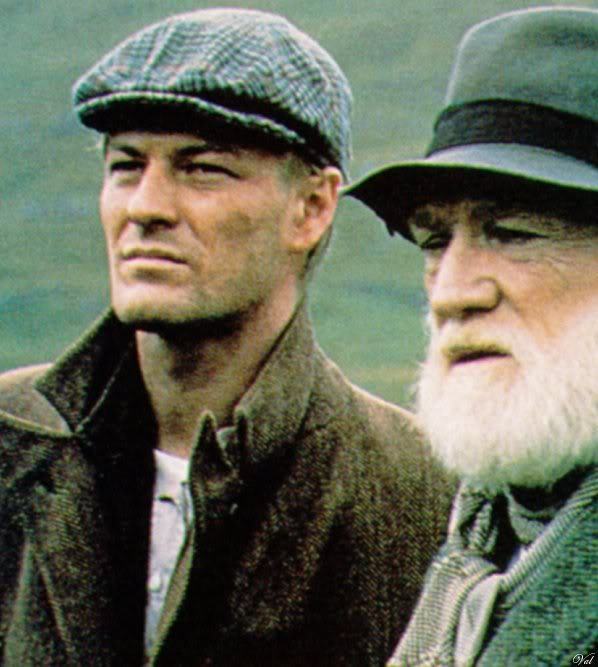 A primal force is Bull McCabe, a bellowing storm of begorra blown round by Richard Harris in "The Field," a blustering tale of The Land, a wild Irish second film from Jim Sheridan. Based on a play by John B. Keane, it is myth broad enough to accommodate, if not contain, both actor's and director's unbounded enthusiasm for their Irishness. Aye, these two have bruised lips from kissing the Blarney Stone.

Set in western Ireland in the 1930s, the film concerns the local reverence for The Land, a lingering animism that finds Bull McCabe, like some pagan priest, sacrificing life, love and Heaven itself for a small plot of sweat-sweetened pastureland. "This is what we'd be if it weren't for the land," he tells his son Tadgh (Sean Bean) as the two gather seaweed for the stoking o' the soil. Sure and 'tis wet kelp we'd be without the holy earth to keep us dry.

His rented field is the one thing McCabe has managed to change for the better in his threescore years of trying. Tortured by his first son's suicide, disappointed in Tadgh, rejected by his wife (Brenda Fricker), who has neither slept with nor spoken to him for 18 years, betrayed by the parish priest, haunted by Ireland's tragic history, McCabe's got everything but Job's boils. We can hardly blame him for obsessing on his pretty field.

Aye, but obsession will drive a body mad it will. And McCabe, though a strong and willful one, is no exception. For years he's been tending the field, which belongs to a widow who is selling it partly to spite the McCabes. But by local lore the field belongs to McCabe, who with Tadgh has turned the rock-strewn parcel into a jewel that would make a leprechaun greener with envy.

McCabe, who is not named Bull for nothing, is not worried when the field is put up for auction, for none of the locals would dare top his bid of 50 pounds. What he hadn't counted on was the American (Tom Berenger), a land developer who wants to cover the field, naturally, with concrete, thus adding concern for the ecology to the mighty McCabe's burdens. "This is deep, very deep, deeper than you think," says the Bull, prior to setting Tadgh on the American.

Poor Tadgh. If only he could get up his nerve, he'd run off with the local Carmen (alluring Jenny Conroy), the tinker's redheaded daughter. The Land is of no interest to this repressed, inbred youth, whose dramatic task is to break away from his father. Bean gives one of the most believable performances in this florid allegory, which also features John Hurt as Bird, the town simpleton. Hurt removed his caps for the role and plays it with his own teeth, yellow stubs as rotten as a peat bog.

Though "The Field" gains the use of The Land itself in the transition from stage to screen, as with the majority of plays, there's the groan of the boards in the dialogue. When Bull looks out o'er the blustery sea to the north, you can almost see the footlights glistening in his eyes. Sheridan, who was so honored for "My Left Foot" last year, seems out in left field here, undone by the sheer hokum of the material. Aye, 'tis sad.

"The Field" is rated PG-13 because it contains physical brutality.