Trailer for The Dark

Enjoy the lovely screencaps in a full screen slideshow. Click link below

Behind the scenes picture 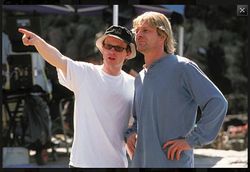 Sean Bean is such a lost talent, he's a great actor and never seems to be given a decent or lead role. Even in Lord of the Rings he was cast as the turncoat. So I was excited to hear that he was the lead man in this movie, although not the lead it was a good step. Plus it was a British film and a horror. These things all combined to make me think that this was a movie to see.

Both Bean and Maria Bello are very convincing in the movie. Bean plays the straight up man who is confused by the happenings around him and just wants to make the family happy again, he plays a super convincing Father. Bello gives a great performance as she is called upon to be a trying mother, confused, insane, panicked and totally distraught. Not that much of a range really! The interplay between these two actors is very good, and when Bean has scenes with the daughter, he's just superb.

Something that becomes quite annoying through the first half of the movie are the deliberate scare tactics used by the Director, they are exceedingly formulaic and you know when they are coming and even when the shock comes. Still, all credit to them, you still leap out of your chair even knowing when a scare is coming. The formula is pretty constant through the first half, slow music, a long single scene, slow movement and no action, usually in the darkness, then a few fast cuts together accompanied by a loud sound and a raise in the music tempo, and there you have the scare. During the screening people were leaping like mad!

After a while following this formula the film does turn around on itself and become something different. It's here that it becomes a lot more psychological and indeed, clever. There was a big feeling in this half of Event Horizon, particularly the flashbacks to being strapped in the chair, fast, multiple cuts of horror.

However during the latter half it also becomes confusing and very weird, yet I wish the whole movie had been like this. It could have abandoned its standard scare tactics and concentrated on the plot in the latter half, and this would have provided for a much more psychologically scary movie.

There's a particular moment near the end of the movie when a door closes in front of the lead, and your emotions are totally with the character at this point. Confusion for a few seconds and then a slow building understanding. It's a very good moment.

Still, however clever the entire ending is, I still felt it lacked clarity and subtlety. Dropping the scare formula of the first half would have brought a much better movie, and getting rid of the premise of scary sheep would have helped too. Perhaps it's a British thing, but sheep are not in the least bit scary, in fact coming from a Northern Scottish town sheep are considered far from scary. It just seemed to be a plot device that was struggling not to be absurd.

In a last-ditch attempt to pull her family back together, New Yorker Adèle (Maria Bello) travels with young daughter Sarah (Sophie Stuckey) to Wales - to see Sarah's father James (Bean Bean) and try and patch their lives back together in the surroundings of an old cliff-top farmhouse.

But Adèle's worst nightmares are realised when, days into the trip, Sarah is tragically swept out to sea, pulled into the dark depths despite Adèle's desperate attempts to save her.

While James leads the search for Sarah's body, a guilt-ridden Adèle is haunted by visions and traces of her daughter - its almost as if Sarah is trapped somewhere in the house itself.

Learning of an ancient local legend of a place called The Dark - an ethereal land of the dead that is a distorted mirror image of the real world - Adèle becomes convinced that Sarah is trying to communicate to her from The Dark.

When she finds a strange, scared little girl in Sarah's bed, Adèle is sure this girl Ebrill (Abigail Stone) is the key to getting her daughter back. For the legend dictates that the dead can be returned from The Dark if a sacrifice is made - one of the living for one of the dead. And if this girl is who she says she is, she died over 60 years before.