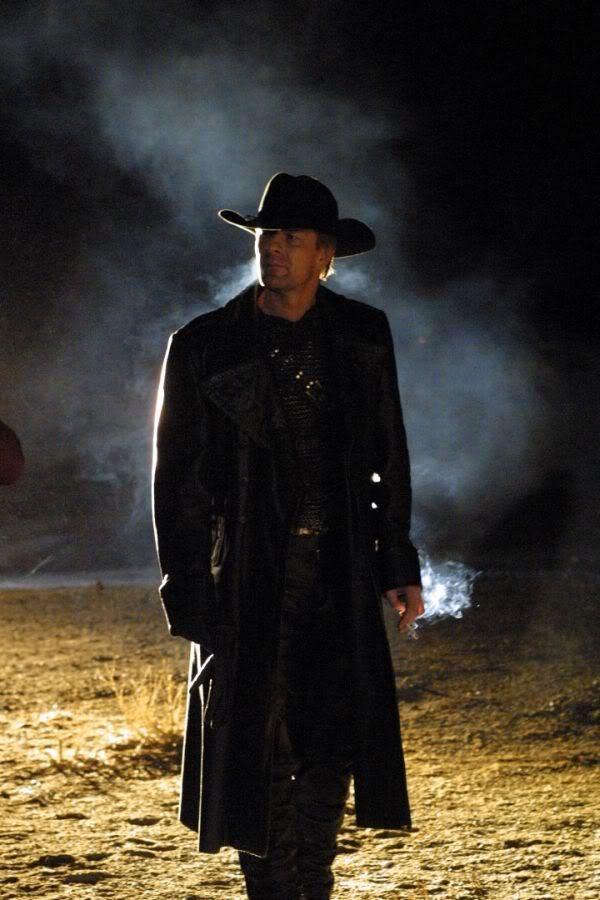 Farrell stopped on her way to Vegas in Baker, California. This is where The Big Empty wwas shot. She managed to make some prettygood pictures on the location where Sean's scenes were shot: The Royal Hawaiian Motel, and even the infamous Room "111" where Jon Favreau eventually meets with Cowboy and Grace. So thanks to Farrell! 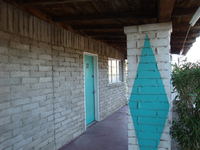 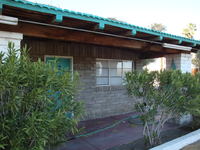 Scans of a article in "Venice", november 2003. Scans thanks to Agape ! Click twice to enlarge. 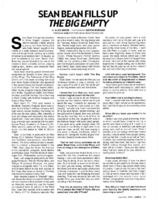 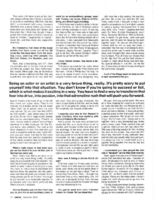 A few screen captures from The Making Off, thanks to Malefide. Click twice for full size.

On the set. Thanks to Pendragons. Doubleclick thumbs. 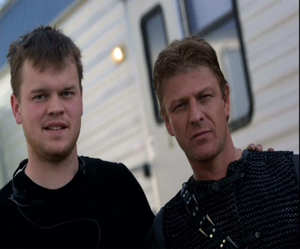 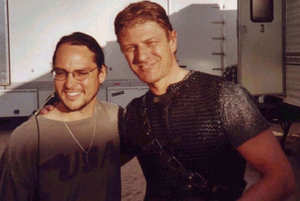 Counting Down movies The Big Empty

What's it about? JOHN PERSON (Jon Favreau) is a 30-something struggling actor living alone and facing eviction from his unfurnished apartment in Hollywood. Behind on his rent and heavily in debt, he goes against the better judgment of his pretty neighbor GRACE (Joey Lauren Adams) and accepts an unsolicited offer from his strange neighbor NEELY (Bud Cort) to courier a blue suitcase up to the desert truck stop of Baker, California. There, in the middle of nowhere, at a seedy motel in the shadow of The World's Largest Thermometer, he'll simply deliver the locked suitcase to a trucker called COWBOY (Sean Bean) and be paid twenty-seven thousand dollars in cold, hard cash. John's given a loaded gun and told he must defend the blue suitcase with his life. It's easy money. But on arrival he discovers he's already missed the mysterious man and soon he's reluctantly mixed up with young local vixen RUTHIE (Rachael Leigh Cook), her mother STELLA (Daryl Hannah), Ruthie's hot-headed jealous boyfriend RANDY (Adam Beach) and paranoid, alien-obsessed locals. When special agent BANKS (Kelsey Grammer) arrives at the local watering hole to question him about the murder and decapitation of his strange neighbor and hundreds of people recently gone missing, John realizes that he might be mixed up in something much more dangerous and bizarre than he ever imagined. Nothing is ever easy. Later that dark night, Cowboy violently appears, John finds himself caught somewhere between the surreal, the supernatural and the just plain weird. And when the final showdown begins, John is faced with a choice that could change his life forever. Has this whole town gone mad? Or are the loony locals, who John dismissed as being crazy, the only sane things about this strange parallel universe called The Big Empty?

The Big Empty tells the story of John Person, a budding actor who is faced with a stalled career and a mountain of debts.  A nosey eccentric neighbour offers to eliminate his financial woes, if he will simply deliver a plain blue suitcase to a mysterious gentleman.  The gentleman will be waiting in the isolated desert town of Baker, California. In desperation he accepts.

There, in the middle of nowhere, at a seedy motel in the shadow of The World's Largest Thermometer, he'll simply deliver the locked suitcase to a trucker called Cowboy (Sean Bean) and be paid twenty-seven thousand dollars in cold, hard cash. Seems like easy money. But then John is given a loaded gun and told he must defend the blue suitcase with his life