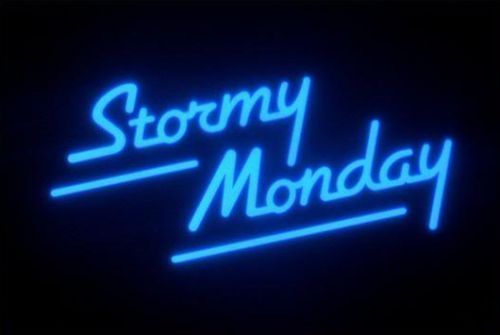 Back before Mike Figgis hit it big, he directed this quirky little neo-noir thriller.  It hasn't proven to be one of his lasting legacies as a filmmaker; for everything it does right, it goofs up in some profound way that nearly sinks it  its plot is pretty thin even by the standards of such potboilers, and two fine lead performances by British actors (Sting and a young Sean Bean) are clumsily countered by two dopey ones by American actors (an ultra-hammy Tommy Lee Jones and Melanie Griffith, clearly letting the clock run down on her fifteen minutes of fame).  That said, it's worth watching for two reasons:  first, it gives you an important stepping point in the development of Figgis' career, should you be interested in pursuing such a thing; and second, it's crazily gorgeous to look at.  It features some nearly perfect cinematography by the estimable Roger Deakins, all rain-slicked streets and cheap neon and hazes of cigarette smoke and shadows that people fall into and never emerge.  It's all surface; you'll find no depth here no matter how hard you look.  But if surface is all you're looking for, you could do a lot worse than Stormy Monday. 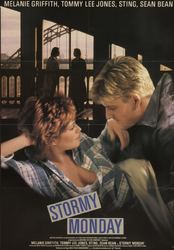 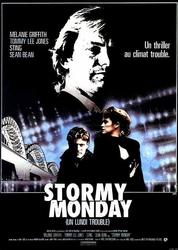 It wasn't until Leaving Las Vegas in 1995 that Mike Figgis assumed his position as a major British filmmaker, by which point he'd already made three distinctive features, the first of which was Stormy Monday from 1988. Conceived while he still had a day job as a teacher, and drawing deeply on his own experience as a budding jazz musician in Newcastle, it's visually inventive rather than dramatically compelling, but as quietly atmospheric as the blues standard from which it takes its name.

It's American week in Newcastle - a celebration of Anglo-US trade and friendship. Arriving in town is Brendan (Bean), a jazz fan who takes a job as cleaner at The Key Club, a waterfront dive owned by Finney (Sting). Brendan hooks up with breathy American waitress Kate (Griffith), but The Key Club's future is jeopardised by Cosmo (Jones), a ruthless American businessman intent on buying it up and colonising impoverished Newcastle. At first it looks like a simple case of squaring up to the rapacious Yank, but gradually it becomes clear that the four of them are inextricably bound, and that far from cementing international relations, a showdown is on its way.
The screenplay keeps too much back for too long, and when the multi-layered plot finally unravels it suddenly looks rather thin. But for Figgis this is all about neon reflected in oily water, wailing horns and empty streets. Roger Deakin's cinematography, Figgis has said, takes its cues from the American artist Edward Hopper, and the film captures that sense of washed-out romance and urban melancholy associated with noir, and effectively transports it to the north east's own windy city.

For a director working on his first feature, Figgis secured a prestigious cast. Griffith's smoke-eyed moll is a seductive mix of glamour and innocence and the performance ranks among her best. Unfashionable though it is to admit, Sting had his moments as an actor, and in the 1980s he was adventurous about the choices he made: Chris Petit's Radio On, Dennis Potter's Brimstone & Treacle, the space oddity that was David Lynch's Dune. Here he's an elegantly disheveled but quietly charismatic presence, well matched with the understated Bean.

Britain's infatuation with Americana in the 1980s - in music as well as filmmaking - threw up some terrible, clunking monsters. Figgis's intimate knowledge of the territory enables him to sidestep the obvious clichés and explore more ambiguous terrain. This isn't a great film but it's an interesting one, and it contains the seeds of Figgis's subsequent success.
Verdict
An atmospheric mix of urban grit and northern noir assembled with the artful imagery and moody timbre we've come to expect from Mike Figgis.
Source: Channel4.com 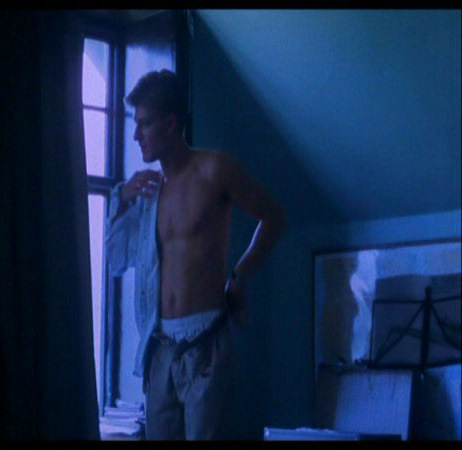 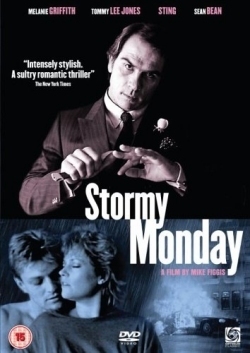 "Why is it," someone was asking the other day, "that you movie critics spend all of your time talking about the story and never talk about the visual qualities of a film, which are, after all, what make it a film?" Good question. Maybe it's because we work in words, and stories are told in words, and it's harder to use words to paint pictures. But it might be worth a try.

'Stormy Monday' is also about symbols. It takes place mostly near the seedy waterfront of Newcastle, where a crooked Texas millionaire is trying to run a nightclub owner out of business so he can redevelop the area with laundered money. But now we're back to the story again. You see how easy it is to slip. The movie uses a lot of symbols of America: the flag, stretched large and bold behind a podium.

Baton twirlers. A curiously frightening old man with a sinister smile, who struts in front of the baton twirlers, his shoulders thrown back, tipping his hat to the crowd. A car - big, fast, and red. Bourbon whiskey. Marlboros and cigars.

It is also about lonely furnished rooms, and rain, and standing in the window at night looking out into the street, and signaling for someone across a crowded nightclub floor, and about saxophones, which are the instrument of the night. It is about the flat, masked expressions on the faces of bodyguards, and about the face of a man who is consumed by anger. And it is about kissing, and about the look in a woman's eyes when she is about to kiss a man for the first time. And it is about high heels, and cleavage. I believe I already mentioned cleavage. Some images recur more naturally than others.

The movie is not all images. It is also about sounds. About the breathy, rich and yet uncertain tone of Melanie Griffith's voice, which makes her sound as if she's been around the track too many times and yet is still able to believe in love. And the flat, angry voice of Tommy Lee Jones, who never seems to raise his voice, or need to. And about the innocence in the voice of Sean Bean, an earnest young man who only wants a job and gets trapped in a bloodbath. And about the voice of Sting, who looks Jones in the eye and talks as flat and angry as he does, until Jones's shoulders slump. And about saxophones, the sound of the night.


Haunting Foursome In a Web of Menace

Mike Figgis happens to be a fledgling director whose reach is more than matched by his grasp, which is very lucky, since his 'Stormy Monday' might have amounted to overreaching had it been handled with anything less than Mr. Figgis's absolute assurance. Here is the kind of neo-film noir plot that could easily seem mannered; here is a fragmented story that could easily add up to less than the sum of its parts. Here is an idiosyncratic setting - the waterfront nightclub district of Newcastle, England - that could easily have grown claustrophobic if it had not been filmed with so much feeling and skill.

But Mr. Figgis, who is a musician as well as a film maker, brings the place, the plot and the film's haunting characters vibrantly to life. What's more, he makes them irresistibly interesting. 'Stormy Monday' is a sultry romantic thriller that holds its audience rapt with the promise of imminent danger, and is able to do this in an amazingly natural, unaffected way. Mr. Figgis, who wrote the film's original score, even manages to work some great blues songs into the jazz-tinged soundtrack, and to give the film a soulfulness matching that of the music. As if this weren't enough, he's also gotten superb performances out of all four of his principals, who are fascinatingly mismatched. Despite this, the chemistry is there, for when Kate (Melanie Griffith) first meets Brendan (Sean Bean), she quite literally bowls him over. Kate, an American, has drifted into Newcastle at the behest of a powerful businessman named Cosmo (Tommy Lee Jones), who likes using her as a sexual lure in his dealings with other men, whereas Brendan has arrived in town with even less sense of purpose than that. Brendan gets a job in a nightclub run by the cool, insouciant Finney (Sting), and with this, the circle becomes complete. Cosmo has plans to pressure Finney to sell his club, and Kate and Brendan are caught between them. The narrative tightens slowly and inexorably, until it all most effectively comes together.

'Stormy Monday', which opens today at the Embassy 72d Street and the Gemini, tells its story very well (Mr. Figgis also wrote the screenplay), but it isn't the plot for which this film will be remembered. It's the haunting, deeply evocative mood that's most impressive, and Mr. Figgis modulates it beautifully. His direction, which is intensely stylish without any effort or strain, has a way of prompting rather than forcing the audience's interest, and a gift for arousing the viewer's curiosity. This isn't a trick that's done with mirrors; it's done through characters who are, for a film of this genre, exceptionally substantial and real.

The stellar Miss Griffith, with her sexy, singular blend of kittenishness and strength, is entirely at home here, making an irrevocably strong impression. So does Sting, whose quietly menacing performance in a character role is perhaps the film's biggest surprise. Mr. Jones makes Cosmo dangerous in a much more direct way, and he turns the ugly-American role that is the screenplay's thinnest into much more than a mere caricature. Mr. Bean is a wonderfully sturdy yet unassuming hero, giving Brendan exactly the right mixture of sweetness and suspicion. In the end, each of these four principals is appreciably changed by the events that unfold here, which makes for a very satisfying story, and for a great deal of eye-opening in a relatively short time.

Also in 'Stormy Monday' are the various musicians (including a Cracow Jazz Ensemble, comically out of place during Newcastle's weeklong, gimmicky celebration of all things American) and thugs and functionaries who give the film its abundant background texture. That these minor details are as well chosen as the major ones is yet further proof of Mr. Figgis's commanding new talent.