Ronin, the new action thriller from director John Frankenheimer (The Manchurian Candidate), opens up by helpfully informing us of the following: "In feudal Japan, the warrior class of samurai were sworn to protect their liege lords with their lives. Those samurai whose liege was killed suffered great shame, and... were no longer referred to as samurai... Such men were called Ronin." And, although the film takes place in modern-day France, not ancient Japan, the main characters are all, in their own way, Ronin. They are munitions experts, tactical masters, and battle-hardened veterans of the Cold War who, after the systematic dismantling of the Eastern Bloc, find themselves without a master to serve. So they sell themselves to the highest bidder.

Personality-wise, they fit somewhere between the Magnificent Seven and the Dirty Dozen. There are, however, only five of them (six if you count the woman who's paying for their services). The most visible, and the one with the best instincts, is Sam (Robert De Niro), an ex-CIA operative who needs the money a job like this offers. Sam is joined by a Frenchman, Vincent (Jean Reno); an ex-KGB computer expert named Gregor (Stellan Skarsgard); a nervous weapons expert, Spence (Sean Bean); and an experienced driver, Larry (Skipp Sudduth). They are being paid by Deirdre (Natascha McElhone), an icy Irishwoman who is as close-mouthed about the specifics of their job as she is about Seamus (Jonathan Pryce), the man who pulls her strings. All that Sam's team knows is that they are to steal a mysterious case from its current owners before its contents are sold to a group of high-bidding Russians. However, what appears to be a straightforward ambush- and-assault operation turns ugly when betrayal and duplicity are stirred into the mix.

The trademark style of writer David Mamet is indelibly imprinted upon this script. Although the dialogue doesn't bear the staccato rhythm that Mamet brings to the movies he directs, the lines are sharp and occasionally bitingly funny. According to Frankenheimer, Mamet is responsible for almost the entire screenplay. However, since the Writer's Guild decided that he had to share credit with J.D. Zeik, who originated the story, Mamet elected to go by the pseudonym of Richard Weisz. But, even though there is no "Mamet" to be found anywhere in the credits, his fingerprints are all over Ronin.

Despite a complex script (or perhaps because of it), there is a formula to the way Ronin progresses: every plot twist is accompanied by a car chase and a shoot out. So, because the storyline develops in a serpentine fashion, not only are a lot of bullets used (and, upon occasion, the artillery is a little heavier than a handgun), but there are at least four lengthy car chases that employ The French Connection's point-of-view approach. However, while the chases are all tautly filmed, attention grabbing, and logistically complicated (especially one that features a high-speed race through a tunnel and onto an expressway against four lanes of heavy traffic), that may be one car chase too many for any movie.

The cast is undeniably top-notch, and there isn't a weak link. It's in large part because of the performances that the characters, whose backgrounds are all shrouded in mystery, are so compelling. Robert De Niro, doing a rare action film, is a perfect choice for the unflappable Sam, who remains cool regardless of the situation. Equally imperturbable are Stellan Skarsgard (he displayed considerably more fire in Good Will Hunting) and Jean Reno (playing a role not entirely unlike the one he essayed in his international breakout feature, The Professional). Natascha McElhone (The Truman Show) essays one of the coldest, most forceful women to grace the screen this year. Supporting roles are filled by Skipp Sudduth (54) as well as a trio of James Bond alumni: Sean Bean (Goldeneye), Jonathan Pryce (Tomorrow Never Dies), and Michael Lonsdale (Moonraker).

The sense of atmosphere is strong, recalling noir efforts dating back to Hitchcock. The first half- hour transpires at night, and, when we finally see daylight, it's in muted colors. France (both Paris and the Riviera) has rarely looked so bleak. In another obvious nod to the Master of Suspense, Ronin has an obvious McGuffin - a case that contains something that people are willing to both kill for and die for. Most of the speculation about this film will probably be concerned with what's in the case (similar to the endless discussion that surrounded Pulp Fiction), because we never actually find out.

Unlike many thrillers of this sort, which devolve into a series of mindless action sequences, Ronin manages to remain focused on the plot and the characters, even while staging increasingly complicated pyrotechnic set pieces and offering its share of white-knuckle moments. The film is consistently exciting, if a little overlong, and never fails to keep us guessing. Ronin also snubs a few conventions of the genre. For example, when a character departs before the midpoint, he does not suddenly re-appear later in the movie to either (a) cause trouble, (b) take revenge, or (c) save the day. That's certainly not the only reason to see this picture, but it's one of several small pleasures that, when they're all combined, make Ronin a significant cut above the average thriller. 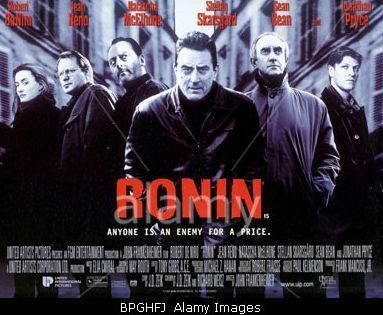