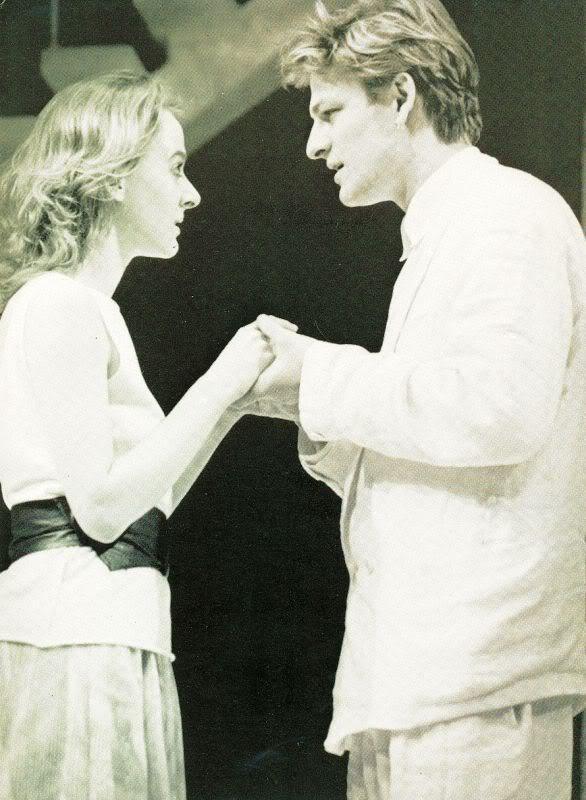 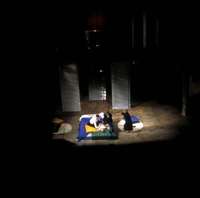 Sports cars and leather jackets, roller skates and white suits, rock guitar and television news... Michael Bogdanov's production ripped Romeo and Juliet out by its 16th Century roots and planted it firmly in the glittering, greedy 1980s. The war between the Capulets and the Montagues was based on business rivalry, with Capulet a self-made Tycoon who spends so much time in his Marble and Glass Office that his much younger wife is clearly conducting an affair with Tybalt. The Mantua carnival features roller skaters and three figures wearing caricature masks of Ronald Reagan, Margaret Thatcher and Helmut Kohl. Romeo's despairing trip to the apothecary to buy poison becomes a seedy encounter with a scar-faced drug-dealer. Tragedy is just business in 1980's Verona.

The street fight between the mature, sozzled bachelor Mercutio (Michael Kitchen) and the sure-footed, savage and leather-clad Tybalt (Hugh Quarshie) provided one of the production's dramatic highlights. It was portrayed more as the result of their respective vanities rather than the product of a long-standing, festering hatred with Mercutio leaping onto Tybalt's car to avoid getting hit - then Tybalt stopping the fight to check for potential chips in his paintwork! (Click on the right hand image to read some of the stage directions for this fight)

By allowing audiences to clearly see their own time played out on stage, Bogdanov introduced some more humorous moments into the play, reminding us that this rather unusual tragedy begins with many of the same elements that you would find in a comedy. This interesting slant on the play softened the central tragedy of the play, making Romeo and Juliet's estrangement from society seem like a by-product of their friends' and familys' collective self-centredness. They may have died young, but when they lived their lives had colour.

From the midst of this bustling, callous world, Niamh Cusack's Juliet was a figure of admirable sweetness, strength and simplicity. This Juliet had a poor relationship with her distracted, cold mother and her cheery but unaffectionate nurse. Whilst alone in her room, preparing to take the sleeping draught, Juliet comforted herself by playing Debussy on her flute. By simple gestures such as these, and by the plain affecting whiteness of the lovers' costumes, the production showed that Romeo and Juliet were very different from the loud, brash world around them where Mercutio and Tybalt duel on guitar and saxophone at the Capulet Party.

Sean Bean was the perfect compliment to Cusack's very composed Juliet. Honest and emotional enough to be a good lover, yet rugged and direct enough to credibly fight Tybalt to the death, Bean proved to be one of Stratford's most popular Romeos. As a couple their feelings for each other were portrayed as clear-sighted and pure, tragic without being hysterical and loving without excessively emotional. Their very un-modern love simply had no place in the modern world.

A few B&W ones, click thumbs for full size 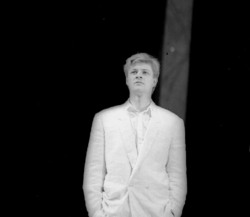 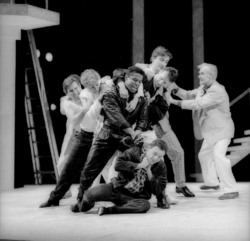 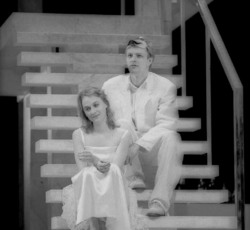 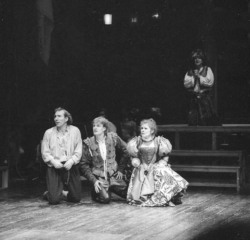 Tonight, tonight won't be just any night. Tonight there will be a rising star at the centre of the theatrical world - Stratford-on-Avon. It will be the biggest night of Sean Bean's life.

For the local lad who has spent more time in the past shouting down from the terraces of Bramall Lane than up to Juliet's balcony, it means the climax of a meteoric rise to the top of his profession.

Just a few years ago 26-year-old Sean was set to join his welder father Brian in his Sheffield steel fabrication firm.

And before that his dreams had focused on football with ambitions to play for his beloved Sheffield United.

Instead he is now preparing for his part in "Romeo and Juliet", the story of young lovers from powerful feuding families in 16th-century Italy.

The new RSC production is vaguely "Romeo and Juliet" meets "West Side Story" - the hit musical which used the basic fighting families theme - in a modern setting.

The Bogdanov version is Shakespeare's text given a 1986 setting, complete with motorbikes and denims rather than hose and tunic more usually associated with the bard.

But this would seem to suit the Sheffield actor: "There's a lot of risk involved but I would say the idea works well on the whole.

"The way the production works would probably come as something of a surprise to some of my mates back in Sheffield - a few have found the news that I'm playing Romeo quite amusing!

"A friend from Sheffield called Paul Fairchild came down to London recently to see a match with me and had a good laugh."

Sean now lives in London with his girlfriend, Melanie Hill, who is starring in "Auf Wiedersehen Pet" as Hazel, but comes up to Sheffield whenever he can - particularly for home games.

"I would have liked to play for Sheffield United," he says wistfully, "but at the moment it's looking like I've done the right thing.

Mum and dad, Brian and Rita Bean, who live in Handsworth, had their doubts too.

He recalls: "They were a bit worried that I was throwing away the chance of a steady job by not following my dad, but when they saw I was serious they gave me all the support I could have wanted."

Sean got serious about acting after being taken under the wing of tutor Wyn Jones at Rotherham College of Art and Technology.

His first attempt at drama ended when he left his course after three days but she tempted him back.

A scholarship to RADA came next, and then three years in theatre and on television (including a starring role in an advert for a certain alcohol-free lager).

The way he has leaped straight into the RSC in a major role is phenomenal, but now he faces a possible two years of hard work in the role.

"I am looking forward to the first night. The important thing is not to be edgy and overawed. There is a lot of pressure on, I must admit, but I think I can cope.

"Down here it seems very different from Sheffield. People aren't as down-to-earth."

I've bought this on Ebay. The interesting bits are scanned here L Click for full size ! 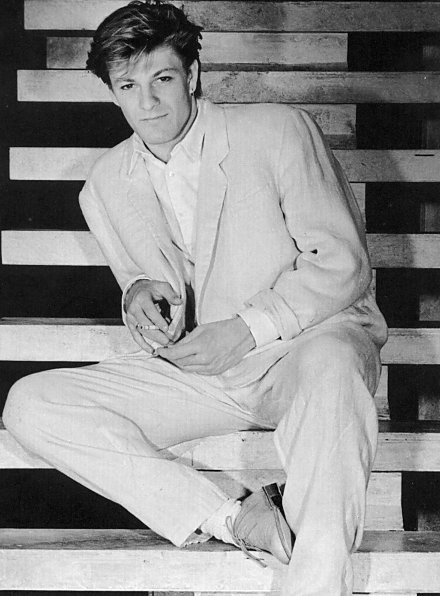 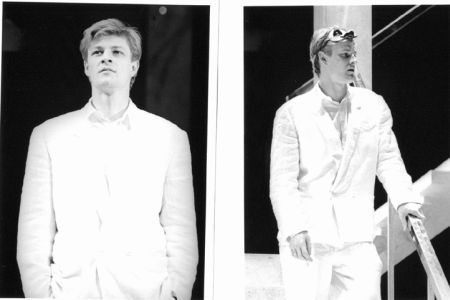 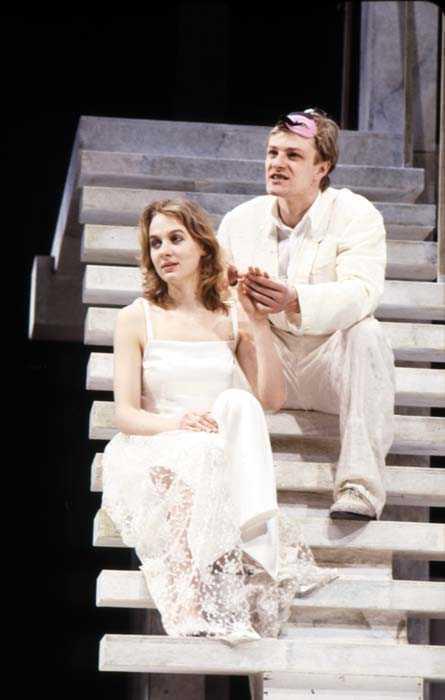 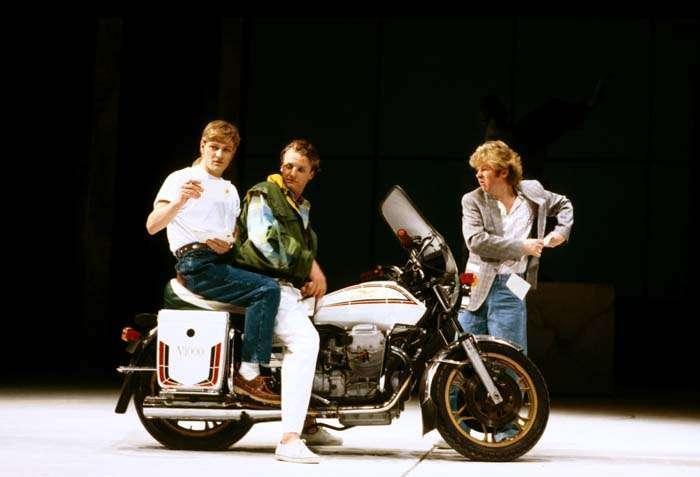