A few screencaps made by Pudge from the first show.

Three more , HR pictures from the show, thanks to HKLettuce. Click thumbs

NBC has put on some things on the Crusoe site, have a look here

Templa Omena on LiveJournal gave her kind permission to post her pictures here.

Museum is setting for filming of TV adventure

HOLLYWOOD comes to the picturesque village of Hutton-le-Hole this week, giving both the village and the popular Ryedale Folk Museum a massive shot in the arm. A £13 million television series based on the story of Robinson Crusoe has been commissioned in the US by NBC and part of it is being filmed in the museums grounds.

Actor Sean Bean, who starred in Sharpe and the blockbuster movie Lord of the Rings, plays Crusoes father and Sam Neill, of Jurassic Park fame, is a family friend. US actor Philip Winchester, who played Scott Tracy in the recent remake of Thunderbirds, is cast as the English castaway. The 13-part series, which will be filmed in South Africa and the Seychelles, as well as the UK, is the first remake of Daniel Defoes novel since 1965.

The drama follows the adventures of Crusoe and his fellow castaway Friday, after being marooned on a desert island for years. The series will feature flashbacks to Crusoes life in the UK as a child, his love affair with Susannah, played by British actress Anna Walton, his family and efforts to become an entrepreneur Ryedale Folk Museum, with its carefully preserved buildings dating from the 16th century and beyond, makes a perfect setting.

Museum manager and parish councillor Kevin Simms said production company Power Studios approach- ed the attraction about four months ago and, after visiting the site, liked it so much they immediately began negotiations to use it. He said : Theyre using three of our buildings  Stang End, which will be Crusoes home in the film, Manor House, which will be turned into a warehouse, and Crofters Cottage, although I dont know what their plans are for that yet.

Set dressers arrived yesterday to add an authentic touch to the buildings, with Cllr Simms checking to ensure they use correct materials. He said: I dont have any problems with the changes theyre planning to the interiors because once theyve finished filming, they'll put everything back the way it was. Theyre very, very professional from what Ive seen so far. Theyve bent over backwards to be helpful and are a really nice group of people.

He admitted the production company had made a substantial donation to the museum for the use of its site. Theyve been very, very generous and theyre trying to keep disruption to the minimum. There will be some restricted areas where visitors cant go on Friday and Saturday during filming but well explain whats happening to customers and either offer them a refund or a return ticket.

The TV series is sure to put the museum and Hutton-le-Hole on the map. The company says we will feature on all credits and in all press releases about the series, so thats going to help to bring people here. 

And weve already had an approach from a tour operator whose tour list takes posh Americans on guided tours of film sets, so that's good as well. In lots of ways Robinson Crusoe will help us and there will be a real spin-off for the village.

Some of production crew are staying in Kirkbymoor- side and others are travelling to Hutton-le-Hole each day from York, where they were filming last week.

Southernbelle went to York and made these lobely pictures! 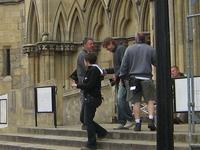 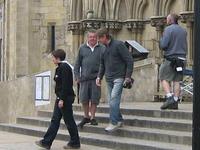 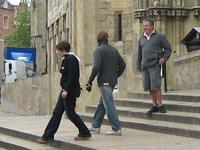 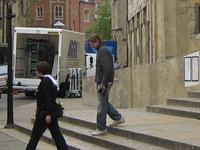 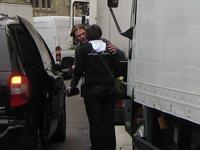 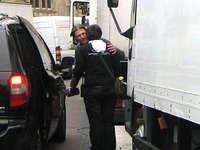 These pictures are taken by "Angela", who was at the riverbank. Angela,if you see this please contact me. I hope you dont mind me posting these ! I've found these pictures on Winona Kent's The Compleat Sean Bean  Click thumbs to enlarge

YORK'S growing reputation as a prime location for film shoots has been boosted by a decision to feature the city in a new television series about Robinson Crusoe.

The 13-part series based on Daniel Defoe's classic 18th century novel is being made for the American TV channel NBC and will also be shot in South Africa and the Seychelles this spring. York has already been used as a location in Hollywood film, including the sequel to the 2004 Garfield movie, the big-screen version of the long-running Jim Davis cartoon strip. It is hoped that the city will also now be able to exploit the lucrative Bollywood film industry after the International Indian Film Academy awards were held in the region last summer.

Gillian Cruddas, chief executive of the city's new tourism partnership Visit York, said: "We are committed to working in conjunction with the city council to making York the most film-friendly destination in the country and our efforts are clearly paying off. "We're fortunate that several locations in York can double for street scenes in London and this is generating strong interest from production companies across the globe. The series will be a fantastic opportunity to promote what York has to offer as a film location, specifically to American production companies, which could result in more productions from the US looking to film here."

Filming for the drama based on Robinson Crusoe will begin next week and will include shoots at the Guildhall and riverside locations as well as St William's College and Fairfax House. York Council's events and festivals officer, Liz Topi, the city's representative on Screen Yorkshire, said: "York is carving out a real reputation as a leading location for film shoots. "We are getting inundated with requests, ranging from small production companies to major film studios. The city is obviously a wonderful location and we want to build on the success which we have already achieved."

The Robinson Crusoe production is an ambitious adaptation of Defoe's novel, updated for a 21st century audience.

Mark - who has very interesting photo material on his Flickr account check it out here, happened to be taking pictures of birds, when he spotted the film crew, and Sean. He made these pictures and gave me his kind permission to use them. Thanks ! 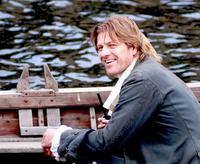 PASSERS-by were stunned when two of the world's most recognisable actors were spotted on the River Ouse in York.

Sean Bean and Sam Neill are in town as the filming gets underway for the TV series Robinson Crusoe.

The pair, who starred in blockbuster movies Lord of the Rings and Jurassic Park respectively, were filming scenes in a boat on the Ouse and then later shot footage in the Guildhall.

A spokeswoman for the production company, Power Studios International, said the actors will be filming in York and the surrounding area for the next two weeks.

She said: "The basic premise for the series is that we start we with Robinson Crusoe a number of years into his stay on the island and then we begin flashbacks into his life in the UK. All the scenes shot in York are flashbacks to his life when he was a child, his love affair, how he built his empire and how it all went wrong.

"The location team wanted somewhere that looked beautiful, traditional and in keeping with the time period they are in. All the actors are having a good time up there and it sounds like they are doing very well.

"Sean Bean plays Robinson Crusoe's father in the series and Sam Neill is a friend of the family."

The starring role in the series goes to Philip Winchester, who recently starred in the Thunderbirds movie, while up-and-coming British actress Ann Walton has been cast in the lead female role.

Meanwhile, tourists and shoppers will be told to stay away from York's most famous cobbled street due to the filming.

Shops and restaurants in Shambles will be forced to close on Friday as film crews move in to shoot scenes for Robinson Crusoe.

City of York Council has warned that Shambles and St Andrewgate could be closed from 4am to 7pm, although Power Studios Inter-national said it was confident businesses would be able to reopen at about 11am.

Shops in College Street, near York Minster, are also set to be hit by the filming, with owners being told to keep their shops shut throughout trading hours on Saturday.

The president of the York and North Yorkshire Chamber of Commerce, Peter Kay, said: "It is always exciting when York gets to feature in a film or television programme, and I hope that the programme makers will make clear in the credits the location of this beautiful city.

"However, there is a price to pay on occasions such as this when streets are closed to enable filming to take place.

"I hope that the local traders have been properly consulted and are to be compensated for the inevitable effect on their trade."

Meanwhile, there will be fewer parking bays available today in Marygate, and the Black Swan pub, in Peasholme Green, will be closed all day on Bank Holiday Monday.

The £17 million series, described by the production team as "a swashbuckling family show in the vein of Robin Hood" is being made by American production company NBC and will include 13 episodes.

Sean Bean gets some expert attention while filming in York

A £13 million TV series based on the story of Robinson Crusoe was announced today, with Sean Bean taking a starring role.

US actor Philip Winchester, who played Scott Tracy in the recent remake of Thunderbirds, has been cast as the English castaway.

The 13-part series, which will be filmed in the UK, south Africa and the Seychelles, is the first remake of Daniel Defoe's novel since 1964.

The series has been commissioned in the US by NBC for broadcast in the Autumn and is expected to be snapped up in the UK.

The drama will follow the adventures of Crusoe and his fellow castaway, Friday, who is yet to be cast, after years of being marooned on a desert island.

Crusoe dreams of being reunited with his family as he overcomes marauding militias, hungry cannibals, wild cats, starvation and apocalyptic lightning storms on the island.

The series will feature flashbacks to Crusoe's previous life, including his tragic childhood with his widower father James, played by Sharpe star Bean.

It also features flashback scenes with the love of his life Susannah (Anna Walton), and his attempts to transform his entrepreneurial aspirations into a business empire under the watchful eye of family friend Jeremiah Blackthorn (Sam Neill).

The series follows in the tradition of other adventure remakes like Doctor Who and Robin Hood.

It is being co-produced by British TV company Power and penned by English writer Stephen Gallagher, whose previous credits include Doctor Who and Eleventh Hour.