Its Babe meets The Lion King in the BBCs state-of-the-art Christmas family drama, a wildlife film with a twist. The lions are the stars of the show - but they sound just like Kate Winslet, Helen Mirren, Sean Bean and John Hurt.

But thats not the half of it. Sourpuss, the cub in question, playfully awaiting her close-up from an elongated probe periscope camera, has also quite a handle on scene-stealing one-liners. She talks to the animals and they, er, well, they talk back. And this isnt some Animal Magic re-run with a Johnny Morris voice-over. That is just sooo last century. No, these lions converse. Witty and engaging chat, it is too, which is rather what you would hope for since Simon Nye (Men Behaving Badly) wrote their script.

If you can swallow that - and the suspension of total disbelief helps enormously here - you will also make leading British wildlife director John Downers Christmas, because with Pride, a 90-minute feature-length family drama, the award-winning documentary-maker and head of the BBCs revered Bristol-based Natural History Unit, has undertaken the most audacious gamble of his career. In a wager that has cost more than £5 million, Downer has used the worlds most magnificent, highly strung predators as his cast and their natural habitat as the stage. Jim Hensons Creature Workshop is computer-generating anything, and occasionally everything, from the neck up, and A-list stars, including Kate Winslet, Dame Helen Mirren and John Hurt, are acting up a storm with character-driven voice-overs from Nyes dialogue.

You either buy into the notion of talking lions (think Babe meets The Lion King with the conversation a tad more urbane) or you dont. The powers-that-be at the BBC obviously do, because Downers dream, which has been three assiduous years in the making, has been given a prime-time BBC One Christmas slot.

Ironically, this hugely ambitious project - 350 hours of filmed material, taking in a total of 50 lions (some habituated, others nomadic, and all morphed into eight main roles) plays host to one of the most tried-and-tested formulas in movie-making: a story of family, rites-of-passage and the cycle of life. What we werent trying to do was recreate a documentary, but to take people on a dramatic journey, says Downer. The lions world is so complex - their relationships are complex, their family life is complex - and there are many, many parallels with humans, so the idea was to treat it as a human drama. Enough happens naturally in their lives that you dont need to invent anything new.

Except, of course, the repartee. And you also need to take account of the fact that, in a glaring deviation from average movie-making, you cant actually direct lions. But, insists Downer, you can anticipate where they are going to be and, although you are not controlling what they do, you capitalise on what you know they do. From this premise, the director, with more than 25 years experience of filming wildlife, was able to guide Nyes script.

Death, a routine scenario for any pride, is deftly handled in the opening scenes when Fleck, a cynical and mouthy little cub (Martin Freeman) is orphaned. In fact, the kill and carcass-shredding is not shied away from, yet neither is it so graphically in-your-face that a five-year-old is going to run screaming from the room.

And, as in any decent family film, theres the no-nonsense matriarch waiting in the wings to stand in as surrogate mum. In this instance, its the archly sensible but warm-hearted Macheeba (Mirren). Her own cubs, nice-but-dim scaredy-cat Linus (Rupert Graves) and giddy-yet-rebellious Suki (Winslet), who falls in love with Dark (Sean Bean), a bit of rough from the wrong side of the tracks, are not so keen on their stepbrother. Still, with a protective mother like Macheeba, they should worry. Well, yes, they probably should, because Darks vengeful partner-in-marauding-crime, Harry (Hurt) would, given the option, eat them both for breakfast. The humour is provided by the double-act, Eddie and James (Jim Broadbent and Robbie Coltrane), a couple of laid-back old boys with halitosis and severe wind problems.

The inspiration for this extraordinary venture came not from leonine cutesyness - although the aaaah factor will have parents fending off requests for a pet lion cub - but a piece of camera equipment that looks as if it was glued together in the Blue Peter studio. Having long pondered the notion of a camera that could get up close and personal to an animal in hostile terrain, Downer handed the challenge over to 54-year-old inventor Geoffrey Bell, the productions boffin- in-residence. In 1997, Bell had created a camera that was tiny enough to be attached to an eagles wing, producing soaring birds-eye footage for the documentary Eagle - Wildlife Special. Three years later, he came up with the boulder cam - simply, a remote-controlled camera that looks like a boulder - and the result was the groundbreaking Lion - Spy in the Den in 2000, with a voice-over by David Attenborough.

With boulder cam you are in there, you feel you are part of the pride, and as soon as I saw that perspective I thought you could tell a huge story using this technique, explains the 52-year-old director. And while the ebullient Downer and his intrepid cameraman, Michael Richards, were at work with the habituated lions, the technical bods back in London were getting to grips with an equally hairy situation. Fur.

The 30-strong team at Hensons in Camden Town, London, home to The Muppets and the two Babe movies, spent ten months painting out lolling tongues, rebuilding gums and teeth for mouths which are generally closed (toothpaste-white and even for the cubs, nice and dirty and real for the older lions), making whiskers move, adding millions of strands of virtual hair, digitally widening the eyes for more expression... Oh yes, and getting those jaws working around the vagaries of the English language. Lions have no muscles in their lower lip, so we have had to give them some, and that also enables us to use the whiskers as a performance device, explains visual effects supervisor Dennis Michelson. With the cubs, we sometimes tilt the edge of the mouth up a little for a hint of a smile. Nothing much fazes this laid-back UK-based Californian, but what did raise his heartbeat a trifle was discovering that one character wasnt represented by just one animal; it could be as many as four. This was a major issue because it would mean that when you put the computerised mesh grid on top of, for example, Macheebas head, it didnt fit at all because each animals facial structure is so different. No layman would spot that it isnt the same lion, but a computer can. It meant four times the amount of work.

Kate Winslets make-over was even more complex because she, like the other cubs, becomes an adult during the course of the film. So, were talking 12 versions of Suki, Linus and Fleck. Winslet, like the other actors, had her fair share of roaring practice, although Jim Broadbent apparently got it in one. Still, if they had tried their roars out in Africa, they would have sounded like petulant whimpers. A real lions roar can be heard five miles away.

The ever-jovial Simon Nye wrote his script without even seeing a live lion. Im not mad on lion research, frankly, because it often gets in the way of a cracking good story, he chortles. And John would tell me if I was departing too far from natural history. But transforming the disobedient and defiant Suki into a vegetarian with a baby warthog as a pet? Admittedly, Africas greatest carnivore refusing to hunt and eat meat is a wildly funny concept, but surely some reality check was needed here?

Three years ago I would have thrown this out as a ridiculous idea, says Downer. But there was a real case of an extraordinary lioness in Kenya adopting an antelope. Eventually a male lion killed it and ate it, and she immediately went off and got another one.

Simon Nye, faithful to the cause of making Pride as realistic as possible, adds helpfully. We are not doing The Lion King. We are working with lions as they really are. Its quite a cosy life, and then these brutal truths emerge. In documentaries, you sort of get used to gory sides of buffalo oozing blood, but if you transfer it to family drama, you have to be that much more discreet. There was an added problem in that the US co-producers, A&E Networks, had invested vital funding in the project and were, shall we say, not overly thrilled with the sexual content of Nyes script. He was only adhering to fact: size matters. Females prefer big manes. A lioness mates once a year (unless her cubs are killed and then she comes immediately back into season) in what can only be described as a sexual marathon - every 20 minutes or so for three days. In other words, up to 150 times. It was the only time I thought perhaps American money was getting in the way, says Nye. They were alarmed by the sexual element, but I thought it was fantastic. The idea was to have Kate Winslet, who is with Sean Bean, saying: Ah, hes off again! which works, I thought, but was deemed to be too strong for a family show. Instead, the preamble to rumpy-pumpy is heralded by a giggling Suki asking Dark to tickle her ears.

Pride may have been filmed in the natural wilds of Africa, with those enormous skies and dreamy vistas, but dramatic licence means that a rocky outcrop has been added here to establish the prides lair, a river there to divide between good and bad, and elephants come to a scene from an entirely different piece of film.

Five years ago, technology wasnt sufficiently advanced for this remarkable film to even get to the drawing board. According to visual effects supervisor Howard Jones, as much as one third of the photography in Pride has been played around with in one way or another, although none of it is computer-generated enhancement. Babe may have been the prototype for animals talking on screen, but that was trained, barnyard fodder in a controlled environment. The last thing that Downer would wish is that Pride detracts in any way from the majesty of these noble beasts. But hes a man who loves to push the limits. He now has his sights set on tigers in India. So, will this be a straight documentary or talking tigers stalking their natural habitat? His noncommittal smile sort of gives the game away

:::Synopsis
Real animals are the stars of this groundbreaking, live-action family film, set against the visually stunning backdrop of East Africa. It combines breathtaking natural history footage, cutting-edge animation techniques and sophisticated animation techniques that allow the animals to talk to each other and tell the story themselves. 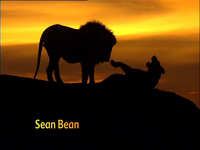