GOOD OLD Harrison, eh? Nice and noble, with his handsome chops and his honest eyes. Hard to rouse but, like a cheapo Gary Cooper, he'll eventually pull out his shooter and drop the bad guys. As CIA man Jack Ryan, Harrison Ford is just as you'd expect; manly, impeccable, a bankable dullard.

Forget Harrison, the wildest thing about Patriot Games is Sean Bean, who plays this king-hell terrorist, blamming his way through Ulster, London, America and Libya, coming out of the water, airborne, in your attic, nursing a monumental grudge, utterly scary. As a review of the Irish situation, the film doesn't rate, but with Sean Bean you've got a fierce study of a blood-hungry fanatic, beyond rules and ideologies. The point where "ordinary" terrorism turns into a swampy body-count that won't be contained.

So Harrison, retired intelligence man on holiday, spoils a group of IRA fringers trying to kill off a prominent Brit, and gets messed up in the runnings. He rejoins the CIA, collars Irish fund-raiser Richard Harris, pulls out the intelligence hardware and defends his family as the pulpy old plot comes around to the bullet-strafing showdown.

If there's to be a run of these Jack Ryan movies (The Hunt for Red October also drew on the character from Tom Clancy's books), I wouldn't get especially excited. But watch out for Sean Bean: he's absolute murder.

Jack Ryan has morphed from a 30something guy (Baldwin) into a 50something guy (Harrison Ford); while in London with his wife and daughter he manages to foil an attempt by the IRA on one of the members of the royal family. In the ensuing carnage, the kid brother of the chief terrorist (Sean Miller, played by Sean Bean) is killed. Miller is arrested, tried and convicted, based largely upon Ryan's low-keyed testimony and Miller vows revenge. This all happens in the first 10 minutes and the rest of the movie is him trying to get his revenge and Ryan trying to keep his family alive: 90 minutes or so of incredible escapes, explosions, and general mayhem.

One of the points of this movie (I suppose) is to point out that there are shades of "bad guys." There are "good" IRA guys, played by Richard Harris, for example, and then there are less good IRA guys (Polly Walker, Patrick Bergin), and then there is your local, "friendly" psychotic, Sean Miller, who takes the phrase "menacing rogue" to a new level. And then there are the shades of "goodness" on the other side: the CIA, whose astonishing technology can pinpoint rogue IRA encampments in the middle of the Libyan desert and through satellite spying, can show managers hidden deep in the bowels of some building in Washington the moment by moment hit on the terrorist camp. Ryan's look of apparent disgust and horror as he watches the base hit by covert operators is a classic of mixed emotions, as the guys who were trying to kill his wife and child are snuffed out. Or were they? Miller and his two cronies are not confirmed hit and sure enough they show up in Annapolis, bent on destruction.

Sean Miller's brooding prison sequence is one of the highlights of the movie; another is his escape from imprisonment in the deepest darkest hole in England. Miller is full of hate, intent on revenge, and completely without mercy. In the original ending, as he drowns, he pulls Ryan under the water with him. They changed the ending, but in doing so weakened Miller's character.

I would have preferred to see this movie as a character war, with less action and more character development. Exploding cars on bridges were not necessary. The escape from the house over the rooftops, in the pouring rain, no less, seemed more than improbable for a child just out of the hospital, an aging royal duke, and a woman in heels. Please! The moments when Sean Miller is on screen, his character sizzles with hatred; even during the 15 seconds when his voice only is on the telephone, threatening Ryan's daughter, Miller's hatred dominates the scene. Ford plays aging normal guys in extraordinary circumstances so well and Sean Bean plays menacing rogues excellently. Combined, they offered the potential for very tense psychological warfare, but this was not fulfilled. This is one of Bean's memorable psychotic killers and for me, and despite Harrison Ford's undeniable ability to dominate the screen, Sean Bean's performance was the highlight of the film. 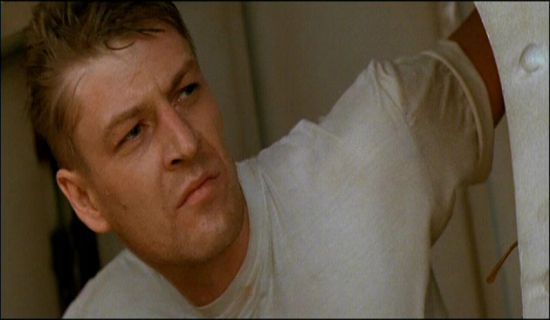 "Not for honor. Not for country. For his wife and child."

Review/Film: Patriot Games; Fear and Loathing on the Trail Of Evil in the New World Order

THE Queen of England owes a debt of gratitude to the makers of "Patriot Games," the sleek film adaptation of Tom Clancy's best-selling paranoid thriller. Their version of this story is so intelligently streamlined that it has the good grace to leave the Queen alone.

In Mr. Clancy's original, which revolves around a plot against the Prince of Wales and his young family, the heroic ex-C.I.A. agent Jack Ryan foils the attackers and becomes an instant celebrity on English television. For his trouble, he is not only knighted but also thanked ad nauseam by Her Majesty. So the Queen visits Jack's bedside and makes Jack and Cathy Ryan house guests at Buckingham Palace, gushing about the adorableness of the couple's little daughter, Sally. The Queen's husband treats Jack like a new chum. Their son, the Prince, listens gratefully to Jack's friendly advice about how to solve his marital problems and how to be more of a man. "We must see more of each other," the Prince declares. By the end of the novel, Jack has saved the Prince's life yet again and feels comfortable addressing him as "pal."

It is some measure of this film's good sense and relative probity that one generic royal cousin (played wryly by James Fox) has now been substituted for the book's improbable lineup of Ryan admirers. Much of the small talk and hubris has been excised from "Patriot Games," leaving just the bare bones of Mr. Clancy's political tug of war. On one side stand Jack, the sanctity of the American family and the remarkable ability of the C.I.A. to influence international events with the help of highest-tech surveillance gimmickry. On the other stand Irish terrorists who, in the absence of the kinds of cold-war villains who populated Mr. Clancy's "Hunt for Red October," are the author's best exemplars of the forces of anarchy and evil. Or at least they'll have to do.

Unlike the heartier "Hunt for Red October," which was directed by John McTiernan, "Patriot Games" takes a pensive, moody view of the intrigue in which Jack becomes embroiled. As directed by Phillip Noyce, an Australian, it has more in common with Mr. Noyce's meticulous, brooding thriller "Dead Calm" than with the earlier Clancy-based spy story. Mr. Noyce's approach is quite elegant (thanks in large part to Donald M. McAlpine's decorous cinematography and James Horner's mournfully lovely score), even if that sometimes seems peculiar in light of his material. The cool, sophisticated staging of a car chase through rush-hour traffic amounts to a cinematic oxymoron.

"Patriot Games" delivers the best possible version of a tale that boils down to nothing but gamesmanship, as its title implies. Except for a minor casting problem on the home front (Anne Archer, as Cathy, has become much too familiar in the role of the warm, ruefully sexy spouse), it concentrates on the string of elaborately staged ambushes that are this story's main attraction. For all its polish and its apparent global span, the film never really moves beyond the hollow question of whether the Ryan family will survive each new threat to life and limb. "You get him, Jack," snaps the once-serene Cathy, after an Irish terrorist makes a threatening call to the Ryan home. "I don't care what you have to do -- just get him."

From the attempted strike at the royals near Buckingham Palace to a two-pronged attack on the Ryans after they return to Maryland, the film moves chillingly toward one last, watery showdown that recalls the ending of Martin Scorsese's recent "Cape Fear." Lodged somewhere in mid-story is a remarkable and emblematic sequence in which coffee-drinking C.I.A. analysts, dressed in business suits, stand quietly watching abstract computer images. The eerily beautiful scenes shown on the monitor represent the flaming destruction of a terrorist training camp halfway around the world.

Despite its many violent episodes, the film remains bloodless. Perhaps that can be traced to Mr. Clancy's fascination with technology, and to his way of treating human characters only slightly less methodically than he treats machines. The Ryans are so generically happy, and the terrorists so generically bad, that it's a wonder Mr. Noyce can create any real tension or surprise. But he has cast the villainous roles particularly well; the fierce-looking Sean Bean is outstandingly good as Ryan's main antagonist, and Patrick Bergin brings the right air of calculation to the terrorist mastermind he plays. Several of the film's main sequences, like an encounter between Mr. Bean's Sean Miller and David Threlfall as the police inspector who has been his captor, derive their horror from the looks of pure loathing that these terrorists bestow upon their prey.

Mr. Ford's restrained performance is just right for this chilly atmosphere, and he even brings some earnestness to the happy-family scenes, which are otherwise saccharine. He makes a more plausible Jack Ryan than Alec Baldwin did in the earlier film, partly because this screenplay (by W. Peter Iliff and Donald Stewart) is less obsessed with technical jargon and high-tech toys. The devices that are used here -- an antennalike video camera that can creep under closed doors to do its spying, or the satellite technology that can scan a terrorist training camp from somewhere in space -- are gratifyingly unobtrusive. One exception is the infrared goggles that are critical to the story's final showdown, and wind up recalling "The Silence of the Lambs."

"Patriot Games" can be as readily watched for its subtext as for its main events. From the sign marking "Hanover Street" (one of Mr. Ford's earlier credits) to the portrait of John F. Kennedy on the wall at C.I.A. headquarters, marginalia often takes on unexpected prominence. One bit of trivia worth noting is that the authentic look of the Ryans' waterfront homestead on Chesapeake Bay was achieved only by digging up and later replanting 17 palm trees. This visual embodiment of Ryans' wholesome, traditional values is quite synthetic, and was shot in California.