Quotes on Sean as Ian Howe

Sean Bean was drawn to the role of Ian Howe—the entrepreneur who initially finances Ben Gates’ treasure hunt only to reveal he has his own motives—because he thought it would be great fun to play someone so cunning and conniving.

“Ian is smart and bold like Ben but also quite ruthless and greedy,” says Bean, “and this is where he differs from Ben. Ben is interested in America’s treasure for the good of the people, whereas Ian is in it for his own prosperity. I think this contrast, along with their intelligence, makes them very interesting rivals for treasure.”

Says Jerry Bruckheimer of Bean’s modern-day version of the relentless and malevolent foe: “You can’t have a great hero unless you have a great villain, and Sean is a wonderful villain. He plays it very smart, as somebody who is very shrewd and clever, and is never far behind Nicolas Cage in trying to find the treasure.”

Adds Jon Turteltaub: “Sean is a very sexy bad guy. He has an amazingly commanding voice and he is also very powerful and comfortable with himself on screen. We wanted Ian to be an extraordinary obstacle for Ben Gates—a guy who has no moral limits whereas Ben has to wrestle with his—and Sean gave us that.”

A smashing night out as Sean bonds with Cage

YOU can take the bloke out of Sheffield but you can't take Sheffield out of the bloke... as Sean Bean demonstrated when a night out with Hollywood star Nicolas Cage left him picking up the pieces! For when a valuable artefact got smashed at the superstar's home, Sean did what any other cash-conscious Yorkshireman would do - and reached for the glue!

The two actors were working together on new action adventure National Treasure - released in c inemas on Boxing Day - when Sean was invited round to Cage's house for an evening of pool. "The poolroom is sort of a prehistoric cave and it's full of fossils and the skulls of different animals," Sean recalls. "I think we both of us had a few drinks and Nic fell over and his pool cue knocked this bear skull to the ground and it smashed to pieces. "And he wanted to bury it, to return it to the earth or something but I was like: 'No, just get some glue and I'll stick it back together'."

National Treasure sees Sean cast as the film's bad guy, a scheming billionaire determined to get the better of Cage's treasure hunter and get his hands on America's famous Declaration of Independence, alleged to hold the secret to the legendary treasure of the Knights Templars and the Freemasons. "I've played a few bad guys, including in the James Bond film Goldeneye a few years ago," he points out. "But I think they're all quite different characters and they're all different bad guys so that's okay with me."

In the past few years the former Sheffield steelworker has worked with some of the world's biggest stars, most recently including Brad Pitt in epic Troy, but none have more of a reputation for eccentricity than Cage. "I think he's a great guy and weird both at the same time," he says. "He's really one of a kind I suppose, a unique personality and he was always great to work with, just very good fun and very easy going.

" Now one of Britain's biggest stars - he was recently voted the second sexiest man in the UK - Sean admits he still loves working with the film world's biggest names. "It's completely exciting to me," he says. "I don't feel jaded in any way at all. I mean, what could be more of a rush than working with people who I admire? "The chance to work with Richard Harris or Peter O'Toole was just amazing and the same with a Jodie Foster or a Nic Cage. You know, these are people that you see when you're a kid or when you're a starving actor and just desperate to get a job."

The one role everybody's talking about at the moment is 007 now that Pierce Brosnan has finally bowed out of the part but Sean doesn't seem in too much of a rush to join the queue of actors wanting to take over as Bond. "First of all, I think Pierce is really good in the role so I don't see why he doesn't do one more," he says. "As to me playing James Bond, well, getting killed as 006 in Goldeneye, I think that sort of puts me out of the picture, wouldn't you say? "So I think I'm not in the running. Not that I'd mind playing James Bond at all. It's sort of a complete fantasy isn't it?" 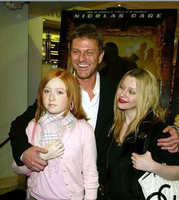 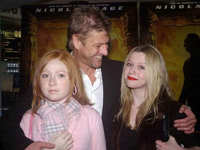 With the sequel to National Treasure coming our way this Christmas, it is only natural that we would get a new special edition of the original Nic Cage flick. Cage stars as a treasure hunter seeking a mystical treasure that has been passed down through generations.

The film turned out to be a very fun romp, with Nic Cage on top of his game and Sean Bean a great adversary. I would call it Indiana Jones light, and it turned out to be one of 2004s better money makers. On Dec. 18, just three days before the new movie hits theaters, we will get the National Treasure: Collectors Edition.

I find it strange that much of the extras have optional commentary, but there is no commentary track for the movie itself. Although not mentioned, I would almost guarantee the DVD will also come with Movie Cash for the sequel. 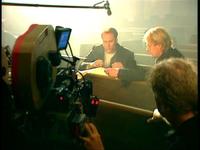 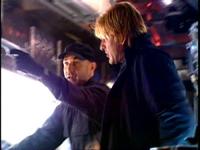 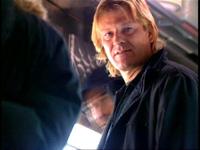 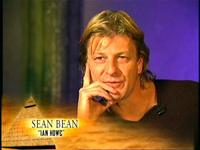 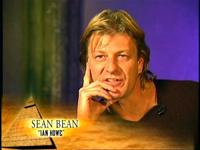 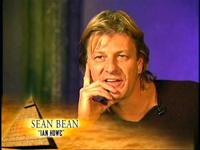 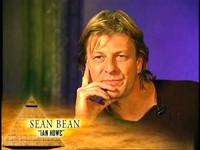 And with John Voigt

Thanks to Seanata, here's a selection of critics' opinions of Sean's role :

Bean gives the film's standout performance as the menacing Howe, who will do anything to keep Gates out of his way. He's a focused and resourceful villain that never becomes unnecessarily violent, yet remains a worthy opponent in every way. - GW Hatchet 18 November 2004

Sean Bean, as the villainous Ian Howe, is a perfect Machiavelli and the rest of his supporting cast of henchmen are kind enough to speak in various foreign accents so everyone watching the movie can identify the bad guys instantly. - Tufts Daily 18 November 2004

Of course, Sean Bean plays the evil treasure hunter whose only motivation is greed. We know where that got him in The Lord of the Rings. - BB spot 19 November 2004

Sean Bean is a great import who doesn’t typically star in the best of films (other than �The Fellowship of the Ring�), but he still usually stands out. - Echo online 19 November 2004

Nicolas Cage plays an amateur historian who believes that Thomas Jefferson and other Freemason framers had a giant hoard of ancient treasure that they needed to hide from the British, so they stashed it and left clues in invisible ink on the back of the Declaration of Independence. He believes it, and so does a ruthless millionaire bad guy (Sean Bean, still coveting gold rings), a Euro thug who wants the map and wouldn't mind destroying the Declaration in the process. - Philadelphia Daily News 19 November 2004

As the stock villain -- the rival who wants the treasure purely out of greed -- the filmmakers also make it interesting. Sean Bean (Boromir in The Lord of the Rings) massages the role and turns it into something as complex as Cage's leading man. So the two become worthy antagonists. - Winnipeg Sun 19 November 2004

He has been searching for clues to the fortune since he was a kid and, with the help of a likable wise-cracker (Justin Bartha, the developmentally disabled kid from "Gigli") and a less-likable historian (Diane Kruger), he is about to find it. Unless a multinational group of villains, led by the inevitably villainous Sean Bean, gets there first. - St. Paul Pioneer Press 19 November 2004

Ben has been working with the adventurer/financier Ian Howe (Bean, ever the handsome-but-vicious villain), when a falling-out turns Ian into a psychopathic competitor. - Daytona Beach News-Journal 19 November 2004

Sean Bean rounds out the major cast as Ian Howe. As usual, he makes a great bad guy. - Coming Soon.net Bartha strikes the proper note of nerdy introspection, and Bean is his usual sinister self. - St Louis Post Dispatch 19 November 2004

Sean Bean delivers the expected gloom and doom a la Goldeneye. He begins the film as a teammate-an interesting twist. - Digitally Obsessed Throw in a rogue colleague (Lord of the Rings alum Sean Bean, looking suspiciously like Queer Eye’s Carson Kressley) and a sympathetic, buxom federal employee (Diane Kruger, still recovering from Troy), and you’ve got a recipe for general-purpose action-adventure, Bruckheimer-style. Think of it Raiders of the National Archives. - Detroit Metro Times 24 November 2004

Clues are passed from generation to generation in Gates' family, with Cage finally having the means to track down the most concrete one, having gotten the backing of a rich Brit (Sean Bean, cornering the market on evil European types). - Brock Press Too bad he has to steal the Declaration to complete the search. That instantly sets an implacable federal investigator (Harvey Keitel, doing what he does easily) and a Richard Branson-ish, but evil, British business magnate (Sean Bean, ditto) hot on his heels. - Sun Herald 25 November 04

The only solid performance is by Sean Bean who made a career out of playing the villain. - Jamaica Observer 25 November 04 We don’t see enough of Sean Bean in “National Treasure” but, as usual, He’s good at playing the bad guy. - Romantic Movies 18 November 24

All his life, Benjamin Franklin Gates (Nicolas Cage), third generation treasure hunter, has been searching for a treasure no one believed existed: amassed through the ages, moved across continents, to become the greatest treasure the world has ever known. Hidden by the United States of America's Founding Fathers, they left clues to the treasure's location right before our eyes... from America's birthplace, to the nation's capitol, to clues buried within the symbols on the U.S. dollar bill. Gates' lifelong journey leads him to the last place anyone thought to look: a map hidden on the back of the Declaration of Independence. But what he thought was the final clue is only the beginning. Gates realizes in order to protect the world's greatest treasure, he must now do the unthinkable: steal the most revered, best guarded document in American history before it falls into the wrong hands. In a race against time, Gates must elude the authorities, stay one step ahead of his ruthless adversary (Sean Bean), decipher the remaining clues and unlock the 2000-year-old mystery behind America's greatest national treasure.

Premiere with Lorna and Molly