Enjoy the screen captures in a great slideshow, with the option for full screen 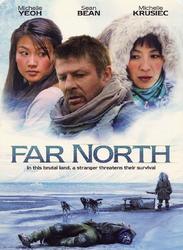 A stunning wallpaper made by stormatdusk! Click thumb for full size. 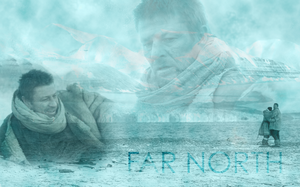 Full of surprises and sharp as an ice pick.
HOLLYWOOD REPORTER

Ravishingnuanced and compelling to watch There are moments when FAR NORTH achieves the visionary, timeless quality of a folk tale.The film looks (and sounds) stunning.
SCREEN INTERNATIONAL

A strong, simple human story economically told with minimal dialogue and breathtaking cinematography. The film casts an inexorable spell and is always moving, right up until the shocking finale Kapadia doesnt put a foot wrong.
PREMIERE

The BFI (http://www.bfi.org.uk/) will screen Far North on December 10

IN between his two spells braving the heat of India for Sharpe's Challenge and Sharpe's Peril, Sean Bean went to the other extreme by venturing to the Arctic Circle to make a film called Far North.

" It's tough and it's challenging, but it's very exciting, and very rewarding," says the Sheffield actor. "I wouldn't have missed it for the world."

Far North is a story of myth, love and revenge played out against the epic landscape of the snowbound tundra in which the harsh but contented isolation of two women is interrupted by the arrival of a stranger. The pair end up competing for his affections with devastating consequences.
Bean, along with Michelle Yeoh and Michelle Krusiec, make up virtually the entire cast of the film as the only human presence in the vast snowy wastes.

Even then the dialogue in the film written and directed by Asif Kapadia is minimal. "I quite like that, I like what you can do without dialogue," says Bean. "I like the way Asif presents characters and landscapes without having to explain the plot and the exposition. I like the way that he looks at things, and he frames things. And I quite enjoy watching silent films because you had to get over the meaning and the feeling ï¿½ I know they can get a bit hammy sometimes, and a bit obvious ï¿½ but there is a way of doing it without speaking sometimes, which I prefer. And I think sometimes words are not necessary.

"I think once we get inside, once we all share that experience ï¿½ myself and the two Michelles inside the tent ï¿½ then it's a different story. Then there is the dialogue, where we found out who this man is, who they are, what their story is, and that's going to be really interesting. But I think it's very economical, the dialogue, and that's something I quite admire ï¿½ someone who can write a piece of work without having to explain everything, without hitting you in the face with it."

Bean says when he signed up for Far North he expected conditions to be tough as he did when he started on Lord of the Rings ï¿½ "but I suppose we had more money on that," he adds.

As someone who has lived in cities all his life, it was a bit of an eye-opener. "I think it just gives you an idea of, maybe, how other people live," he says.

"I think that most of us live in very busy cities, and everything's there all the time, everything's where you want it. You've got the media ï¿½ you've got TVs in your face, you've got radio ï¿½ you've got everything. Here we couldn't even get a text message to anybody for three weeks. It does give you that sense of isolation, which is good for the character.

"But to think that people can live in these conditions, and to live off the land, and to live from day to day ï¿½ that's what I find fascinating. Maybe it's because I'm from Sheffield, which was industrialised, it was busy and there were people around. And now I'm in London, and to come here and just to see people that actually do live here is quite amazing ï¿½ I just wonder what they do sometimes, you know?

"Maybe it's a better thing, maybe we've got too much shoved in our faces all the time, I don't know. Maybe there is something out there that is peaceful, for them. They all seem pretty happy anyway!"
The film has a shocking dï¿½nouement which ends with Bean's character running naked in shock out into the snow.

He says: "I didn't have any problem with exiting as I did and scarpering, getting the hell out of there. And I thought I would, in some sense, because I've never done that before, it's a very strange experience, it's a very strange sensation ï¿½ to be sat in a tent with no clothes on, in the middle of the Arctic, and somebody says action and you just run out and go, 'aaaghhhï¿½effin' hell!'

"But it didn't bother me because it was good, and I thought ï¿½ I can't be running out of there and pulling me trousers up and all this, it would be like a farce, like a comedy, you know? So, that was ok. And, like I said, it's been tough, it's been hard, it's been demanding, but it's been right."

Some screencaps. Making those cost a lot of time, so please be so kind to give credit to this site when using them. 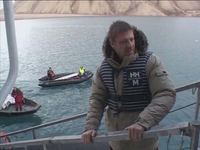 Sean with some of the extra's

Some of the girls from the German Bean website bean-land.de went to a Far North screening, and managed to have a private chat with Asif Kapadia, the director. Read their interview here

Screenshots from the Far North Presskit. Click for full size.

The photos are from "Longyearbyen lokalstyre" and one taken during the Svalbard filming, and provided by Lasse Ostervold who worked with them on the film. Click to enlarge 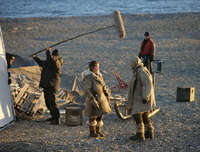 Far North will be screened at ICA Cinema in London on Sunday, January 13, followed by a Q&A with director Asif Kapadia.

Far North will have three screenings at the TIFF, on 17th, 18th and 19th. The online ticket sale opens January 11 and the box office opens January 12. Michelle and director Asif Kapadia are scheduled to attend the Tromso International Film Festival. 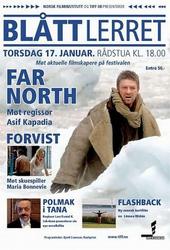 Far North is on Celluloid Dreams's screening lists for the American Film Market (AFM, Oct 31 - Nov 7) and the Rome Film Festival Market (Oct 18 -27). Far North is currently looking for distributors. It has been sold in the following territories: Portugal, Greece, Turkey, Ex-Yugoslavia, Middle East, Bulgaria, Brazil, Colombia, Taiwan, Singapore, Malaysia, Indonesia, and India. The Chinese title of the film in Taiwan will be "Crime and Punishment in the North".

The new release date for Sara Maitland's "Far North and Other Dark Tales" is March 27, 2008. The collection of short stories features Far North/True North as the title story and will be published by Maia Press Limited. Image at left: book cover. Click for full size. 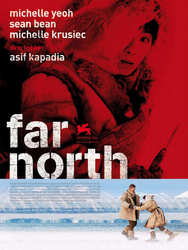 Far North is a dark romantic thriller about the battle for survival. Revenge, jealousy and courage are played out against the harsh beauty of the desolate Arctic tundra.

Saiva, an aboriginal woman shunned by her tribe as a young girl, lives with her beautiful adopted daughter, Anja, in a remote land far away from civilization where she believes they will be safe. They struggle to survive, living off the scarce prey they can kill. Saiva is the sole survivor of a massacre by a troop of marauding soldiers who killed Ivar, the only man she ever loved. Having avenged their deaths, she has avoided any other human contact ever since.

One day a young fugitive, Loki, staggers into their camp and collapses, close to death. Despite all of her fears and doubts, Saiva takes him in and the two women nurse him back to health.

Sean flew to Norway on Wednesday, September 6, 2006, to begin filming Far North. This is an independent film directed by Asif Kapadia, written by Asif Kapadia and Tim Miller and based on Sara Maitland short story. True North will be filming in Svalbard during September and will move to the FilmCampen in Målselv in October. Co-stars are Michelle Yeoh and Michelle Krusiec. Filming is expected to continue until November 2006.

Michelle Krusiec posted the following on her website on September 3: I'm in Norway at the moment about to begin shooting a film called, "Far North," directed by Asif Kapadia. Check out Asif's other film, "The Warrior." He's a very talented director. This film stars Michelle Yeoh, Sean Bean and yours truly. This story is a bizarre love triangle set in the arctic. I'm obviously very excited to be working with this cast and the story is really compelling. Needless to say, I'll be a little out of touch as we are planning to go further north into the arctic circle.

"Stormbreaker" posted the following on Michelle Yeoh's chat board on the IMDb on September 9:

This is a co-production between British production company The Bureau and Norwegian producers FilmCamp, PJB Picture Company and Petter Bergli.

Some information about the cast, crew and story line are leaked to the Norwegian press:

The director is Asif Kapadia
Cast: Michelle Yeoh, Sean Bean, Michelle Krusiec, Per Egil Aske, Sven-Åge Henriksen and Norwegian professor Bjarne Østerud as a shaman doctor.
Budget: 56 million Norwegian kroner. The manuscript is written by Asif Kapadia and Tim Miller, and is based on a novel by Sara Maitland.
Plot Outline: The main theme concerns the conflict between modern society and native people, because values and way of life are different by nature. But the main story boils down to a love triangle between native nomadic woman Saiva (Michelle Yeoh), which has adopted a younger woman Anja (Michelle Krusiec) as her own daugher. They let a man from the west (Sean Bean) move in, and the conflict that evolves between the three people causes serious consequences to their lives.

The main female cast, Michelle Yeoh and Michelle Krusiec, arrived sometime in August at FilmCamp's production locations in a discontinued military camp called Holmen leir in Målselv, Norway. In preparation for their roles they will learn about the way of life of the native Sami people, that will also involve things like how to slaughter reindeer.