Its kind of pointless to review an unaired pilot that can only be seen on youtube, but I cant tear myself away from this thirty seven minute lost episode simply called Faceless.

John Robson (Brett Cullen, The West Wing, The Young Riders) is a Federal Prosecutor about to break his complex case against Los Angeles crime syndicate. Unfortunately, he is shot and brutally beaten right before his wife and children are killed. Robson survives this ordeal and spends the next year working out and making himself disappear. He has become Eddie Prey (Sean Bean, The Fellowship of the Ring, Sharpe), a no holds barred criminal working his way up the underground food chain. Believing her friend to be dead, assistant prosecutor Diana Palos (Stana Katic, Quantum of Solace) continues Robsons case with Special Agent Vincent Ambrose (Reed Diamond, Memphis Belle). Dianas love lost for Robson, however, makes her oblivious to Ambroses affection. Eddie, meanwhile, has joined the crime ranks with Lucas Reynosa (Kevin Alejandro, Shark, Ugly Betty), a low end launderer, and has himself found attraction with Reynosas respectable sister Mary (Yara Martinez, The Unit). Fortunately, Mary doesnt exactly know the violent brutality Prey is capable of in his vengeance against L.A.s corrupt.

Yes, that is the same Sean Bean whos name is nearing the top of my review label tags and his involvement in the project is how Faceless came to my attention. In all his villainy seen and unseen in the US; his period piece heroics abroad; and of course those rough and tumble full frontal nudity loverboys-Sean Bean is perhaps his most complete here. Hes doing bad for the right reasons- for justice, love and family-but Prey is a ruthless ass; His vendetta is brutal even for this Italian. Instead of a dozen films where Bean is little more than a glorified extra, were treated with this gritty, hard hitting tour de force action lead performance from an English 45 year old answering a casting call for an American early 30s animal. Sean Bean did in fact, make it to American prime time this fall in NBCs Crusoe. Bean has appeared in less than five minutes over three episodes of the down spiraling series, not even speaking in two airings. I dont get it, do you?

Faceless is owned by Bean there is no doubt, but the supporting players are ethnic and real. They arent all pretty, but all of them can act. These character players even have similar series among them, including The Unit, 24, CSI, Sons of Anarchy, and Sleeper Cell. I still love Reed Diamond from his Homicide: Life on the Street days. The poor guy was also on the prematurely lost Journeyman, and for Faceless, he wasnt playing another cop. Diamonds Agent Ambrose is one of the team because of his interest in Katics pretty and intelligent Diana Palos, but theres also that hint of FBI ambiguity. Who is the phantom on the phone with all the inside information, anyway?

Every player in Faceless is more than meets the eye. Starsky and Hutch alum Paul Michael Glaser is creepy and suave as crooked porn maven Bailey Hughes, and passé teen heartthrob Brian Bloom is also a pleasant surprise as, of all things, a hit man. Whos genius was it to put all these seemingly has beens into one all around ensemble? Director Joe Cranahan, helmer of Narc and Smokin Aces? Posse writer Dario Scardapane? What of the production backing from Tony Krantz, whos had such success with oh, Sports Night, Felicity, and Foxs darling 24? I personally dont care for it, but I recall the last time a radical writer risked his pet project on character talent and has beens: Pulp Fiction, anyone?

No, theres not a blonde bimbo insight in Faceless. Unlike edgy films like Harsh Times that wallow in stereotypes, Faceless gives us a successful Latina women in contrast with her junkie brother-and shes a potential love interest for the shows older white star. Spanish is used authentically, and the lowly bad boys arent black. Its so refreshing to see such a unique and yet accurate ensemble. Again I feel shades of Homicide, a program that continually fought low ratings and network censorship over too close for comfort storylines and casting.

Youll notice Ive listed Faceless in some very high company, mainly because it doesnt look like a television pilot. Its dark and congested, giving an underground realism; rock is its built in soundtrack. Slick production values and tight camera work, however, also add movie stylings to Faceless. Prey has a great ride and lots of leather, but its cold against the high life and glitzy bling of the corrupt. I imagine these high end values were another nail in this series coffin.

Alas, you must be wondering what the hell is wrong with Faceless. I say its so great, but what did it do that was so glaring, so unforgivable that Fox did not pick it up? Well, nothing actually. Faceless gets everything right. Shall I claim it was even too good? Allegedly Fox did take its option with Faceless, but with conditions. There was to be no nudity, drinking, drugs, smoking, and the violence was to be significantly clipped. Preferring artistic integrity and realism over the pressures of political correctness, the production team and star Sean Bean agreed to simply walk away from Faceless.

Its a frigging shame. Even in these lost thirty seven minutes, so much is laid in place. Perhaps the show would indeed have burned itself out over the course of a season with such heavy stuff, but it would have been damn good television to witness. Would Prey become involved with Mary? Would Lucas drug use undo their plans? Would Diana discover Prey was John Robson? Exactly how far would Eddie go? What is the worst hes capable of? Whom would he sacrifice to find his crime lords? Unfortunately, well never know, and the pilot ends on the creepiest of notes, too.

Were nearing three years since Faceless was produced, but I still hold the faintest of hopes. With raunchy programs like The Shield and Nip/Tuck on Foxs own FX network and such similar edgy work from this small world cast and crew, I find it preposterous that someone somewhere in Hollywood cannot finance and produce Faceless with the gritty integrity it deserves. Showtime? HBO? Even Starz has ventured into the original series front with Crash, and AMC has the shameless and award winning Mad Men. With The Sopranos gone, The Shield ending, and Prison Break dying a slow and painful death, the small screen crime drama demographic is certainly lacking. Shame on Fox for not taking the proper risk and follow the success that would have followed an unobstructed Faceless.

I cannot legally or ethically condone the obtaining of video through nefarious means, of course. However, If you can catch Faceless online, you will not be disappointed-but you will think Fox more stupid.

From the director's blog of Faceless (Joe Carnahan); the caption is from him: Dario Scardapane, myself, Sean Bean and Yara Martinez drinking ourselves into a workday stupor! This is from FACELESS, a pilot that a handful of putzes at Fox torpedoed. Brilliant move guys...how's that fall slate working out for you? Not a single new show in the Top 50? Wow. 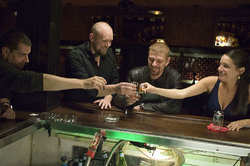 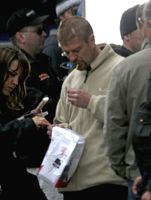 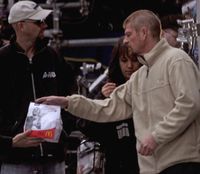 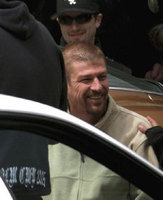 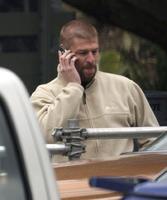 Sean has been cast in the lead of Fox's undercover TV drama Faceless. He'll play heavy-set federal prosecutor John Robson - until he's beaten up and shot. After losing weight, Robson takes on a new identity and goes undercover as Eddie Pray to bring down a major crimelord.

According to the casting call, Federal Prosecutor John Robson lives in Sherman Oaks with his young family. He is driven, brilliant and intuitive. Robson is fiercely certain that there is a link between all the crime factions in L.A., and that there is one overlord whose capture will topple them all. Despite losing support from the FBI, despite the nagging doubt of his assistant prosecutor, Diana Palos, and despite the mounting pressure from his wife to spend more time with their family, Robson won't back down from his conviction and set the wheels in motion, not for the first time, to try to get to the top via one of the middlemen, Lucas Reynosa. Before he can close the deal with Reynosa, however, Robson is brutally beaten, shot in the head, thrown into the river and left for dead - but manages to reach a phone for help and winds up in a hospital, where, after being in a coma for three months and learning that his family has been killed, he emerges, a new man with an old agenda: Eddie Pray

Eddie Pray is a hard criminal, an asshole, an animal, determined, through cunning and brutality, to rise through the L.A. crime hierarchy for his own purposes - which happen to be those of John Robson

Note: This pilot never made it to television!