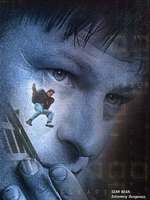 Convicted of the gruesome slaughter of his own wife and young child, Neil Byrne jumps off a speeding train and escapes into the night, leaving behind only his guards and a paperback novel.

Byrne is forced undercover and during his pursuit of the truth visits Shenley Hall, (renamed St Jude's Hospice), to try to get information from a dying man. Scenes were filmed over a two day and night period at the front and back of the building, reception and our training office, which was transformed into a private hospital room.

These are the quite rare production notes for Extremely Dangerous, including an interview with Sean. To read them click the thumbnails twice. It's a pretty interesting read. Please don't take my stuff and post them somewhere else without credit : I pay for things like this !

A Collection of articles

EXTREMELY DANGEROUS
“Layered over the bones of this classic scenario, there turns out to be a careful and compelling study of personal desperation and corporate evil, which buttresses its lofty ambitions with suitably sturdy production values. A strong cast, led by Sean Bean, who must have been waiting desperately for a juicy part like this to come his way.”
TIME OUT

“The direction was tense, spare and menacing and avoided the pretentious stylisation which is so fashionable these days. The dialogue felt convincing and the script was gritty without actually trying to rub grit in your face. Sean Bean had the same air of resentfully moral machismo which he has in everything, which was perfect for the part. Tony Booth was surprisingly compelling as a gangster, and very menacing. I certainly wouldn't want to mess with his daughter.”
THE TIMES

“Sean Bean makes a great action man. He is just right for the role of undercover agent and convicted killer Neil Byrne in Extremely Dangerous.”
MIRROR

“The plot steamed along faster than the Glasgow night train. Writer Murray Smith punctuated the opening episode with lighter moments and with generously outfitted incidental characters. Fortunately, tough 'n' tender is right up Sean Bean's street, and he gives us just the right amount of vulnerability with a touch of psychosis. I'm hooked.”
THE EXPRESS

”How much tougher can Sean Bean get? Bean attacks every role like a human canonball and splatters its guts over the furniture. He hisses out his dialogue as if he were sliding a knife between its ribs. Even if he does something as mundane as reading a newspaper, he does it as if he were hiding a bazooka under his raincoat. Who better, then, to head the cast of Extremely Dangerous. like a clock-work killing machine, coated with granite and teflon.”
THE GUARDIAN

“Extremely Dangerous is pacy and well-acted, with Juliet Aubrey a smouldering gangster's moll partial to lacy lingerie.”
THE INDEPENDENT ON SUNDAY

“Sean Bean developed the skill of Spiderman as cops and robbers failed to catch him. No-one has been that elusive in Manchester since George Best left.”
SUNDAY PEOPLE

“This intelligent production of a complex and edgy story by Murray Smith has the confidence to linger over establishing both its plot and characters. Sean Bean proves he's not just a pretty face with a performance to match the talent around him - Juliet Aubrey, Tony Booth and a scene-stealing Nitin Ganatra.”
TIME OUT

View lovely large screencaps in a slideshow, click link below

Synopsis : A man convicted of the brutal murder of his wife and child goes on the run to try and clear his name. He sets out to follow up a strange clue sent to him in prison. The boss of a local crime syndicate, a former associate, hears of his escape and sends out the word to bring him in. On the run from the police and disowned by his MI5 colleagues, he is faced with the fact that he may be guilty.

Notes : The Sunday Times dated 7th November promoted the series with an article:
The Other Mister Bean: Scary Sean In Extremely Dangerous, ITV Thursday by Sally Kinnes.
Murray Smith has an unusual claim to fame. As the man responsible for ITV's new thriller, Extremely Dangerous, he says he is the first writer to make Sean Bean cry. It was no easy task. One of television's hard men, Bean does not often shed a tear. But in the opening episode of Thursday's four-part series, he has plenty of cause. He plays a man who has been convicted of killing his wife and child, and, as we are constantly reminded, he (or whoever really did it) filleted them like fish.

Set in Manchester's ganglands, Extremely Dangerous makes the city an entertaining mix of menace and naivety. Mini-cab firms may keep guns under the desk, but ask for a drink that is "shaken not stirred" and the waiter will bring you a milkshake. Just because Bean shows his sensitive side, it doesn't mean he is becoming a wimp. He can crack a safe, steal a car and jump from a speeding train. On the run, he takes on - and sees off - the army, policed, helicopters, road blocks, a rapid response unit and GCHQ. If the country has more fire power to throw at someone, Manchester CID has not heard about it. Bean says he kept himself "fairly fit" for the stunts. A Sheffield welder turned actor, the three-times married Bean has had plenty of practice for this kind of role. For four years he played ITV's Sharpe, a maverick officer leading a bunch of crackshots in Wellington's army. Last year, he took the lead in Andy McNab's SAS drama, Bravo Two Zero, and in Goldeneye he was 006, an agent who was one number short of being a hero.

He is currently filming Lord Of The Rings. Though Bean's role dominates in Extremely Dangerous, there is a nice cameo from the Prime Minister's brother-in-law, Tony Booth, as a gangster. In between irking the government - he recently had a go at the "Millbank androids" - Booth's television career has been enjoying a revival. But, busy in the theatre, Booth says he's never been away. "People think if they haven't seen you on television, you're in the morgue". As Murray Smith is the first to admit, it is easy to get a big audience for a thriller. "If it's any good, you want to know that happens". He did not set out to specialize - "I'd have written about obstetrics if necessary" - but once he started to write about crime (Strangers, Bulman, The Paradise Club), he got into a groove. Smith wanted to be a writer the moment he saw a billboard as a fourteen-year-old in Glasgow. "It said: `Glasgow writer gets forty-thousand-pound film deal', and I thought: that's for me". (The writer was Alistair MacLean). First, however, he became a paratrooper and, like McNab, joined the SAS. Unlike McNab, however, whose writing he disapproves of, he doesn't plunder his past. "Characters and relationships leak on to the page, but never real events". Extremely Dangerous has action and complications rather than ideas and is not the multilayered affair Smith planned. But with Bean's Bond credentials, and given ITV's recent ratings for 007, that probably doesn't matter too much".

The series opened on a London to Scotland train, carrying Byrne to a maximum security prison where he was to serve two life sentences. Escaping from the train, he makes his way to Manchester where, during his time with MI5, he had forged covert relationships with the local criminal Mafia. Tortured by horrific flashbacks of the double murder scene, he is determined to prove his innocence at whatever cost. However, former MI5 colleagues and shadowy government figures are ranged against him, and his pursuit of innocence is met with opposition almost immediately.

He is armed with only one clue which points to the identity of the real murderer - he is aware of a book containing Patagonia codes which must be solved, if he can only obtain it. Byrne joins forces with Annie Fleming (Juliet Aubrey), who promises to help him unravel the codes, but her association with Joe Connor (Ralph Brown), a Manchester gangland boss, leads to divided loyalties.

Byrne also makes contact with a former M15 colleague who also promises to lead him to the truth, but on which side is she working? When secret service operators arrange another murder and implicate Byrne, he realizes that he can trust no one in his search for the murderer's identity. As the series drew to a conclusion, Byrne discovered that the codes would enable him to close down his enemies' bank accounts, and thus draw the real culprits out into the open, but Annie is rapidly drawn into the crossfire between Manchester gangland figures and secret service men.

Extremely Dangerous was billed by the Radio Times as "Extremely Baffling", which, in part, is true. The somewhat over-complicated plot ensured that is was littered with holes, but the slick and pacey direction by Sallie Aprahamian (who had already made a name for herself with The Lakes and This Life) guaranteed a fast-paced thriller which delivered quality entertainment for the masses. The series was issued on VHS in 2000, and scored highly with audiences (perhaps reflecting the gravitas with which Bean can attract viewers). Murray Smith again underlined that he has the capacity to deliver fast-paced, gripping stories, harking back to the days when Strangers and Bulman commanded audience attention.