Audio file *Get in that bedroom*

Please credit when use! Click thumb for full size.

In 1995, three criminals were found shot dead in a Range Rover in a quiet Essex lane. This true-life massacre inspired the violent set piece of writers Jeff Pope and Terry Winsor's otherwise fictional Essex Boys, the latest addition to the current cycle of British gangster films. As novice Billy hovers greedily outside Jason's macho world of racketeering, director Winsor (Party, Party) seems to be composing a portrait of a gangster manqué (a figure Eric Zonca explored with subtlety in the Le Petit Voleur). Very soon, however, the film steers into familiar gangster rise-and-fall territory with Billy as the witness to Jason's brutish activities.

As Jason, Sean Bean combines ruthless violence with a preening narcissistic streak, at one point throwing acid in a victim's face, then tutting at the splashes on his shirt. The delight Bean takes in firearms echoes the loving attitude Paul Muni demonstrates towards his machine gun in Howard Hawks' classic gangster film Scarface (1932). Any attempt to deglamorise gangsters in cinema is, of course, enormously difficult, given film-makers' ambivalent, often admiring attitude to the disruptive allure of organised crime. But in Essex Boys Jason is as close to unsympathetic as a screen gangster can get. In this regard, the script's notable lack of humour helps enormously. What made the gangsters of the 30s so beguiling was their snappy dialogue and firecracker wit; here, nothing quotable comes from the mouth of Jason or any of his cohorts. Providing a hoodlum bereft of internal subtleties (there's not even the usual hint of repressed homosexuality) may be out of fashion in the wake of television's The Sopranos. But Winsor's refusal to invest his characters with any degree of psychological complexity ironically secures his film a distinct place in the roll call of British gangster movies.

Essex Boys' other strength is its determinedly local flavour; its feet are planted firmly in British mud. The Essex locations - its sand flats and marshlands - are as well chosen as the grotty northern locales of Get Carter (1971). Even Jason's scheming wife Lisa (the equine Alex Kingston) is as much Essex girl as femme fatale.

Sean Bean at the premiere of Essex Boys at the Odeon Cinema, Southend, Essex on the 14th July, 2000 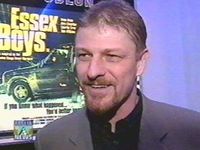 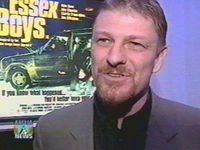 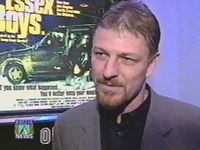 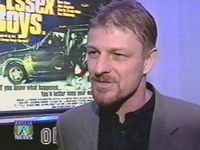 With a hugely diverse range of starring roles in feature film and television, Sean Bean is firmly established as one of the UK's top acting talent. Already an accomplished stage actor (including playing Romeo in Michael Bogdanov's production of Romeo and Juliet for the Royal Shakespeare Company), Bean leapt into the public's consciousness with his portrayal of the dashing hero in the hugely successful Sharpe 's Rifles which ran for five series on peak time television worldwide. Other television appearances have included Bravo Two Zero, Clarissa, Jacob (directed by Sir Peter Hall for CBS), A Woman 's Guide to Adultery and the acclaimed Ken Russell adaptation Lady Chatterley for the BBC.

On the big screen Sean has played an eclectic array of parts from aristocratic villain in the Bond epic Goldeneye, to a struggling factory worker with dreams of playing for his football team in When Saturday Comes and an Irish terrorist in Patriot Games. Other film credits include John Frankenheimer's Ronin, Black Beauty, Stormy Monday, Derek Jarman's Caravaggio and Jim Sheridan's The Field.

Sean saw the character of Jason Locke as a somewhat twisted soul: "Jason is a guy that has been locked away for five years. That's a lot of time to seethe about taking the rap for your mates. They have got rich and have done well while he has been stuck inside. They all have flash houses in the country, BMW's and all the trappings. Meanwhile he's come out to a little flat in Essex. He feels bitter about that, and vengeful. He wants to claim back what he assumes is his rightful place in the criminal fraternity. The trouble is that he wants everything that he has been missing out on all at once.

"Jason is a volatile time-bomb just waiting to go off. He's headstrong and very temperamental. He will fly off the handle without notice, and it's this unpredictability that makes him very dangerous to be around.

"Throughout the course of the film, as well as dealing drugs he takes more and more of them himself, which makes him more and more obsessed and paranoid about people trying to rip him off. It really is a mad headlong journey for him. He'll get to the top of the tree, and will do anything to stay there. He will sort anybody out who stands in his way. But as the power goes to his head he, along with the others in the 'firm' begin to believe they are invincible.

"I tried to build up his past. Jason used to mess around. He likes the girls, and the girls like him. He probably has a checkered history in that respect. As well as his mates, his wife is another major source of his anger and paranoia. There is a bitterness surrounding Lisa, and there's something bubbling underneath their relationship all the time. Half the problem is that they can't quite come to terms with, or even talk about, the anger and resentment between them. But they know it's there and brewing. Eventually it erupts through an appalling and violent argument in the most public of places. They have a very explosive relationship together. They passionately feel for each other - love each other if you like - but they can't handle what's been done in the past.

"He wants to try and make the relationship with Lisa work, but he doesn't know how to go about doing that. He can't quite bring himself to face up to the things that he's done in the past. He can't forget his pride and listen to what she wants. There is a glimmer of humanity there, but he can't bring himself to face what the problem is. Here you've got someone who is very insecure, who's been hurt, but he can't express himself as he would wish.

"The anger that has been boiling up for years comes out in vitriolic, vile obscenities. There is obviously something very wrong there, but that is how Lisa and Jason exist - that is their relationship.

"Saying that, Jason is a really nasty piece of work. Why I would contemplate playing such a violent character? Because what I saw there was a very interesting psyche. This was a role that I thought 1 could make something of. Why not play a character to his full extent?

"I want to keep as broad a range in my work as possible. And also I don't want to miss out on opportunities like this. It was an excellent script and I wanted to do it. I had worked with Jeff and Terry before (on Fools Gold) and we got on really well together.

"Jason is a very influential character within the 'firm'. At this stage he has to catch up with his colleagues. And if he can catch up with them, will he still be looked upon with the same amount of respect? He doesn't feel that he is getting the respect that he deserves, and that is why he goes over the top all the time. Everything he does is over the top, and it's a show of power and of strength, to disguise his frailty and increasing paranoia.

"All I try to do is give a realistic portrayal of the character. In order to get the person right, you have to put yourself in their position. If you don't then it just doesn't ring true. It makes it much easier if you feel right in the character.

"I believe scenes of violence should tell you something about the world we are involved with and that they aren't just shoved in there for no reason. The scene where I hit her around was done last thing at night, and we did it in one take. We used two cameras, and it seemed to work really well. It's the kind of thing where if it works first time then it is fantastic. It's difficult to go through something like that again and again.

"People ask me if there are roles that I would have loved to have taken on. That's difficult. When I saw Nil By Mouth I thought 'what a fantastic film, what a fantastic character'. But saying that, I couldn't imagine anyone else but Ray Winstone playing that character. When I see an actor doing something spectacular like that then I think, 'Shit, I could never top that anyway.' If I wrote a character for myself, I think I would find it very difficult. To write a perfect character is hard.

"For the role of Jason I did do some research in advance -I watched some documentaries and read various pieces on recent events, but you can only go on what you have. I like watching other stuff - I like to see what's around, and to get ideas from other things. But I generally start with what I have in front of me.

"I would like to stress that Jason is a totally fictitious character and, if anything, is a mixture of people and faces, past and present. I didn't want to pin him down to one particular individual as I felt this would constrict his impact within the confines of the story.

"With ESSEX BOYS Terry and Jeff are very ably telling a good story. I think that was the main thing. I know this is an idea they have been playing with for a while. I worked with them on Fools Gold, a very low budget film for television about seven years ago, and that was great. I had a really good time doing that. With this one they even organised a cake for my 40th birthday. They're a great team, who allow their work to be led by an idea - I like that. It's also helpful to have the writers around, I think it gives actors confidence to experiment and go further with potential ideas.

"I feel the basic concept of the film could transfer to most places really. Wherever you go, any city, there is a stratum of criminality. Around that concept Terry and Jeff adapted the story to Essex - the Southend sea-front, the clubs, the organised crime and ultimately the characters that inhabit this world."

I didn't really like this movie, but had to admit it was compelling. Sean Bean gives a performance as the evil drug thug that compares favorably (if that's the word I want) with Dennis Hopper's crazed bully in "Blue Velvet." It's outstanding work, but if you're a Sharpe fan (and who isn't?) it may be a bit jarring. I mean, this guy throws acid in faces, beats his wife, laughs at suffering, rapes a teenager and strangles her more or less accidentally. That's in addition to selling the drugs and other criminal activities.

Bean is, in fact, so good at being bad, he almost tips the movie over. Alex Kingston and Jim Wilkinson - versatile, dependable and often outstanding actors themselves, do what they can to take a scene away from him, and never quite manage. Charlie Creed-Miles, as the innocent who gets drawn into all this, is quite convincingly intimidated.

An icy jazz score and crisp direction keep the story moving along at a brisk pace. You may be repulsed, but you probably won't be bored.