Trailer for Don't Say A Word 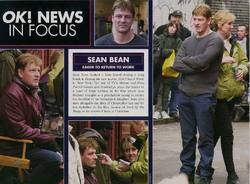 In this child-snatching suspense story, Michael Douglas plays Dr. Nathan Conrad, a successful Manhattan psychiatrist whose eight year-old daughter Jessie (Skye McCole Bartusiak) is kidnapped on Thanksgiving by Koster, a European jewel thief Sean Bean. To get her back, the doctor most promise not to call the police. He is then given seven hours to unlock the mind of a new patient, a deeply disturbed woman, Elisabeth Burrows Brittany Murphy, referred to him by a colleague Oliver Platt, and extract a six-digit number that's the key to locating a rare red diamond worth $10 million that Koster and her father, his ex-partner, stole a decade ago. But Elisabeth cryptically insists, "I'll never tell...any of you." Adapted by Anthony Peckham and Patrick Smith Kelly "True Crime" from Andrew Klavan's novel and directed with visual flair by Gary Fleder , this is a tension-filled, if predictable, thriller, juggling four different scenarios: a) the doctor's desperate attempts to draw the number out of Elisabeth, b) flashbacks to the childhood trauma that has kept her in various psychiatric institutions for years, c) the crooks' interaction with the doctor's bedridden wife Famke Janssen, immobilized after a skiing accident, and d) the involvement of a tough NYPD detective Jennifer Esposito in a seemingly unrelated murder that eventually leads to Jessie's captors. Problem is: you know from the getgo how it's going to turn out - and none of the actors are trying anything new. Douglas faced similar nightmarish predicaments in "The Game" and "Fatal Attraction," while Murphy honed her quirky/crazy character in "Girl Interrupted." On the Granger Movie Gauge of 1 to 10, "Don't Say a Word" is a disturbing, diverting 6, escapist entertainment that really shouldn't be dissected. 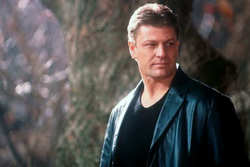