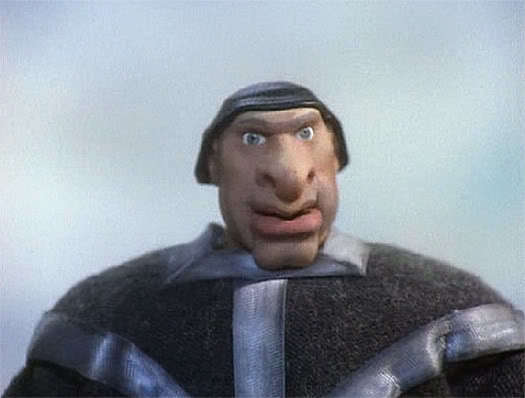 HBO execs may know a good thing when they see it, they just don't always know what to do with it -- the prime example being this Academy Award-nominated series. Each tale drawn from Geoffrey Chaucer's literary classic features a unique and spectacular method of animated storytelling, and although this production is a marvel to look at, it's a strange and ill-fitting addition to HBO's list of children's programming.

Billed in the promotional material as "high-spirited stories ... for older children and their families," "Animated Epics: The Canterbury Tales" is quite graphic even in animated form. The scheduling of the show isn't exactly kid-friendly either, with part one airing at 7:30 p.m. followed by part two the next day at an awkward 3:30 p.m.

This is not the first time literary classics have been presented for kids, especially on HBO. The net's "Shakespeare: The Animated Tales" successfully tackled some of the Bard's more complex stories without sacrificing plot. But Shakespeare has greater universal appeal than Chaucer, and even though it's somewhat toned down,The Canterbury Tales play still be too bawdy for the uninitiated. It is worth noting, however, that "The Miller's Tale" has been omitted from this production.

But, as the animated Chaucer says himself, "Whatsoever you do, don't take me too literally." When looked upon purely as an adaptation without regard for intended audience, "Animated Epics" is a masterpiece of filmmaking and storytelling. Chaucer's colorful characters are brought vividly to life with (literally) warts and all through Olga Panokina and Fasil Gasanov's claymation.

The animated Chaucer is our host and moderator during an eventful pilgrimage to the holy city of Canterbury. The group of characters, ranging from commoners to nobility, represents the changing social class structure of medieval England. All agree to pass the time telling stories, with the best storyteller receiving a dinner at the expense of the rest of the group.

Part one features the cautionary tales of the Nun's Priest, the Knight and the Wife of Bath, while part two contains the saltier Merchant, Parndoner and Franklin's tales. Brimming with symbolism and irony, the series works quite nicely as a companion piece for high school students studying Chaucer, functioning as a decoder for the original Middle English text.

Still, the animation would fall flat if it weren't for the carefully chosen voiceovers, featuring top British actors and Royal Shakespeare Co. alumni including Sean Bean, Bill Nighy, Bob Peck, Imelda Staunton and John Wood. It is their performances that power the production.

Writer Jonathan Myerson shows great savvy in preserving the original flavor of the tales. The language and images aren't compromised because of the animation, in fact, this medium almost allows director Aida Zyablikova more freedom in punctuating Chaucer's wicked sense of irony.

In the 13th century, religion was the centre of ones life, especially the Christian religion. Even the most lowly of people would do anything to make the pilgrimage to Canterbury to revere St Thomas of Aquinas, martyr of Christendom. The Canterbury Tales is that rarest of literary treasures that has lasted for hundreds of years. Written by Geoffrey Chaucer a monastic scholar, it tells the tale of a bunch of people from all walks of life, including a priestess, a summoner, a prince and a pardoner amongst others. The narrator, Chaucer himself travels with these pilgrims as the innkeeper tells each one of them to tell a tale of past experiences to make the journey a little more entertaining. This compilation chooses 12 of the tales from the book set to different kinds of animation. This animated version from 1998 is an international production including shorts from Russia and Wales.

As well as a fascinating trip into animation, the version contains a stellar cast of actors from the stage and screen including Bill Nighy, Billie Whitelaw and Sean Bean. In all there are stories in the Canterbury Tales but the producers have managed to make the book come alive with 3D stop motion puppets and 2D computer coloured animation.

Animators from around the world

In his first film as director Myerson has transformed Chaucer's 600-year-old poem which recounts stories told by pilgrims on their way to the shrine of St Thomas in Canterbury.

Using latex puppets for the pilgrims and a mixture of animation styles from artists in London, Cardiff and Moscow, Myerson's writing and direction has breathed life into this much-studied and daunting classic.

The joint S4C, HBO and BBC Two venture took three years to produce at a cost of £1.5m, and was broadcast by the BBC in December 1998.

The tales are produced in English, Welsh and - for those who really relish a challenge - Middle English. They draw on voice-overs from British actors Sean Bean, Bob Peck, Billie Whitelaw and Imelda Staunton.