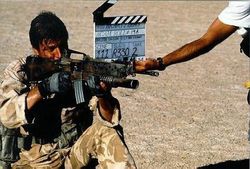 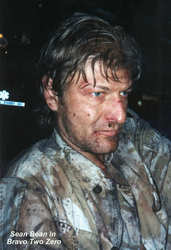 Click thumbs for full size, please credit when use!

"Every soldier hopes for a major war in his lifetime. This one was mine." Sgt. Andy McNab

Storyline:  The true story of the SAS (the elite Special Air Service) mission during the Gulf Conflict that went terribly wrong.  A squad of eight highly trained, professional soldiers led by Sgt Andy McNab, operating under the call sign Bravo Two Zero, are tasked with destroying Iraqi communication lines deep inside Iraq in preparation for knocking out Scud missile sites.  From almost the outset nothing goes right for the team.  Maps and intelligence are unreliable, and they find themselves within yards of an anti-aircraft position. Added to this the fact that their radios are faulty, and a goatherd stumbles on their position.  The team is forced to head for the Syrian border.  Andy gets within a couple of kilometres of the border when he is discovered and captured by the Iraqis.  The rest of the film centres on McNab's subsequent experience of trying to survive as a prisoner of war under torture.

Acting/dialogue:  The acting by all the cast is superb and very underplayed.  In fact, the film plays more like a documentary than a drama.  The dialogue isnt stellar, but then isnt intended to be; these are soldiers, not scholars.  The film is extremely hard to watch during the interrogation/torture scenes, and Sean did a magnificent job of portraying McNab through these scenes as well as the entire film.  The other soldier that stands out was Dinger, an excellent performance by Nicolson.  In fact, all the actors got the characteristics of their roles spot on.  One of my favourite scenes was the flashback to happier times when Dinger is throwing McNabs tapes out of his car window.  The line that I feel stands out the most is McNabs last line when referring what he would do if he met a couple of his torturers on the street. Id slot them.

Believability:  This was extremely believable and as I already mentioned seems more like a documentary. The soldiering here is real, not some Hollywood Rambo-ized idea of war.  In some places it may be too realistic for some viewers, the dentist and latrine scene are very hard to watch, even for the strongest of stomachs.

Turns Ons:   One of the things I most enjoyed about Bravo Two Zero was the fact that no side story was implanted into the plot.  It was done straight from McNabs book.  The music of The Clash, Phil Collins and Madness was also very good to hear.  And I liked Seans/McNabs narration to help explain what was happening.  The running mini-obsession with the green sweets was a nice little touch.

Turn Offs:  The film suffers only in the fact that as in most cases, the book is much better.  In the nearly 2 hours of the film so much is left out or unexplained.  We dont get to know the other team members as well as in the book.  Also, unless you have some military knowledge or have read the book, much of the technobabble will probably go over your head, as there is no explanation as to what such things as an AWAC or TacB is, or what the significance of the shiny thing.

Starring action favorite Sean Bean (THE LORD OF THE RINGS, DON'T SAY A WORD, ESSEX BOYS) and based on a captivating true story written by best-selling author Andy McNab, BRAVO TWO ZERO explores the tragedies and triumphs of men taken to the edge of survival during the Persian Gulf War. When an elite eight-man British SAS team is dropped behind enemy lines, their mission is clear: take out Saddam Hussein's SCUD missile systems. But when communications are cut and they find themselves surrounded by Hussein's army, their only hope is to risk capture and torture in a desperate 185-kilometer run to the Syrian border. With a terrific screenplay by the writer of the classic action hits KELLY'S HEROES and RED HEAT, you'll long remember this compelling story of wartime heroism and bravery.

Sean Bean (Don't Say a Word) plays Sergeant McNab, the leader of a crack team of eight British commandos sent into Iraq during the Gulf War to cut SCUD missile communications in the northern part of the country. They're supposed to slip in and slip back out with none of the locals ever knowing they were there, a plan that's blown to hell from the start when a young Iraqi shepherd sees them and reports their presence to the authorities. From then on, it's a running battle between the Brits and the Iraqis as McNab and his team try to make it to the Syrian border. Some died on the 170 K trek of the cold, some died in battle, some were captured and tortured horrendously...and one made it into Syria.

It doesn't sound like much, does it? Trust me, it's fantastic! This is as real as it gets, with actual war footage spliced into the story and a directing style that makes everything as immediate as if you really are in the middle of the action. Director Tom Clegg knows his lead actor very well (Sean Bean starred in the British Sharpe series Clegg directed) and directs to his strengths: action, power, and average-guy friendliness. South Africa becomes the immensity of Iraq under Clegg's careful hand; everythingscenery and characterslooks perfect and absolutely as it should be. He pans wide whenever possible to show the sheer hugeness of the task at hand (fighting 170K through hostile territory), but the close-ups are spot-on as well. He has an eye for brutality that in a lesser director might've simply become a fascination for gratuitous violence; it's quite gory here and there and painful to watch (especially the Marathon Man-esque dentist scene), but it all belongs and adds to the intensity of the story.

Sean Bean is never bad in anything he does, and in Bravo Two Zero he's at the top of his game, running the emotional gamut from lighthearted joking to agony to pleading to hate. This is a helluva performance he's got going, one so good that it would make the film required viewing even if everything else sucked. (The rest is excellent too, though.)

The rest of the cast is certainly competent, though I confess I was a tad confused as to who was who. (Most of the actors are British television people with nothing American on their resumés.) The focus never really leaves Beanit is, after all, Andy McNab's memories we're watchingso the movie stands or falls on his performance, and it's nothing short of spectacular.

My only complaint about Bravo Two Zero has nothing to do with what's here, not the acting or directing or anything else that we see. Rather, it's what's not here. It's the story itself that's a small problem; Troy Kennedy-Martin's screenplay cuts off suddenly, and we miss a few key moments that should've been there. For instance, one moment McNab's two buddies are being shipped home, leaving him in Iraqi prison; the next, the war's over, and he's going home himself. Why was he detained longer than anyone else, and what happened during the time he was alone with his captors? We never find out. With all the bombing, how was he found by the Allies to be freed at all when the war ended? No clue. How did his wife react when he showed up at home after all this hell? Nothing there eitherWe see him hugging his little girl tight, but where's his wife?

In the final analysis, however, these questions are trivial. Bravo Two Zero is the story of brave soldiers who performed a Herculean feat, and that's what the movie's about. The hows and whys and horrors of this feat are what's important here, and in that context Bravo Two Zero is exceptional, a true must-see. 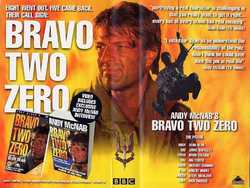